The Clue In The Cookbook 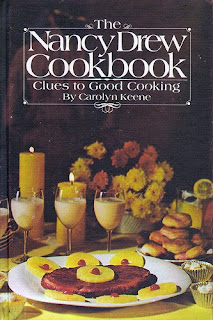 I might have stolen it, but I honestly don't think I did. And yet there it is in my possession, has been for many years, The Nancy Drew Cookbook: Clues to Good Cooking by Carolyn Keene, first published in 1973, with a stamp inside the front cover from the Dover Public Library Children's Room. I'm pretty sure that there was a yard sale of some kind, and I knew I had to have it (in Dover, NH there mightn't have been much of a draw for Ms. Drew) and was the first to snatch up the volume, as slim and elegant as the Titian-haired Ms. Drew herself, with a hamsteak on the cover, bespotted with slices of pineapple and maraschino cherries; further on, some pillar candles; and if you look closely, a mysterious figure lurking in the background amongst an even more mysterious assemblage of perhaps eggnog, multi-colored chrysanthemums, a smattering of cupcakes, and perhaps a plate of sweet rolls.

Tell us, Nancy--what is the clue in the cookbook?

Well, for me, I just set out to make a meal for some good, old friends, Moose and Bear, who are also ardent fans of Nancy, and are as intrigued by the cookbook itself as much as the recipes therein. Frankly, I was a little undone when for the occasion Moose presented me with several Nancy Drew books that had been given to her mother when she was a little girl. She was a great lady and I miss her, we all do. We lost her in 2002. These books had been gifts and were inscribed and everything; one was a birthday present, given to her in 1953, others date back to the 30's.

I didn't clue our friends in as to what exactly Baby and I would be serving from the cookbook though, stolen from Chapter 4, the menu listing of Picnic and Patio Get-Togethers. I suppose I could have done something somewhat more refined like the Souffle Gruen and Lilac Inn Consomme as a starter, but I love anything on a patio and chose items from that instead. There are some hair-raising cliffhangers too, like what would happen if we ate the Leaning Chimney Cones, baloney stuffed with cream cheese and chopped pimentos? The Diary Chicken Salad with mayonnaise, Mandarin oranges, white grapes, pineapple rings and a banana?

During the cocktail hour, we served Miss Hanson's Deviled Eggs (topped with a slice of olive and positioned on plum tomato slices to anchor them) as an appetizer when our guests arrived. Now, I don't remember who Miss Hanson is or what book she's from but we added a little Penzey's Shallot Pepper to the yolk mixture for a satisfying bite. To give the proceedings a kick, we brought our drinks to the sundeck, beginning with a few adult versions of the Scarlet Slipper Raspberry Punch, laced with vodka. Here, we kept the raspberry gelatin, but omitted the "raspberry drink powder mix" and "frozen lemonade concentrate" and a whole cup of sugar on top of that! Instead we used cranberry raspberry juice, light lemonade, and a little lemon zest. Throughout the whole meal, we made some concessions, some modern updates (I never used any margarine for example, only butter). The punch was still sweet but we managed just fine over a beautiful summer sunset.

Crossword Cipher Chicken (a whole chicken cut into eight parts) with crushed Ritz crackers (which subbed for "unsweetened cracker crumbs") was baked for an hour. I used only about half a stick of butter to dip the chicken before breading it with the crackers, onion powder, parsley flakes and grated Parmesan, as opposed to two sticks of butter that the recipe suggested. Same went for Shadow Ranch Barbequed Beans that I made the night before: the recipe also called for two sticks of butter. Don't you miss the 70's? I didn't add any sugar, except for half the amount of dark brown sugar and lightened it up with a can of vegetarian beans and pork and beans, instead of two cans of the latter. I did throw a piece of bacon in though. Emerson Cookout Potatoes with bacon, a blend of cubed cheeses and onions baked in the oven while the chicken cooked too and was then served alongside. It was a lot of food but, perhaps not so mysteriously, everything disappeared! If you do happen to have any of the potatoes left over, they'd be great heated up the next day with some scrambled eggs.

Whistling Bagpipe Crunchies was our hysterical dessert, with melted peanut butter and butterscotch stirred together with mini marshmallows and chow mein noodles that were supposed to be shaped into "strips resembling bagpipes," whatever that may mean. They were really good.

Afterwards, by candlelight we read a passage or two from the stack of several Nancy Drew books that I had placed on the table as a sort of centerpiece. This actually was a very special moment as this stack now included the books that had been a part of Moose's mother's collection.

Later still, Bear and I rocked out to old Barbra Streisand albums, singing at the top of our lungs.

It's no mystery why we have good, old friends.