LOBSTER-IFIC! (Or How To Cook A Lobster And What To Do With The Shells Afterward) 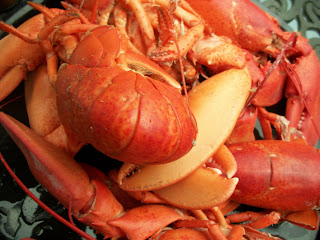 Because of the incessant rain and generally miserable inclement conditions, my annual summer trip to our place in Friendship, Maine (the family manse, a modest affair we've had for 30 years now, that we refer to as 'the camp') was beset with several difficulties, and favorite things that I always enjoy had to be put aside for another time: The Old Man (a ripe 82 years) couldn't dig for fresh clams due to the deluge; there was to be no kayaking unless we were in full water-rafting gear as if poised to shoot the rapids; and our happy hour cocktails during the wondrous sunsets on the deck were dampened at best, to say the least, even though I had bought a vintage Hawaiian shirt specifically that I figured would be just perfect for our summer ritual, scored by the lush, cocktail arrangements on Mr. Henry Mancini's Martinis with Mancini album. But we made do, as one does when one must, and while we weathered the storm, the martinis and lobsters still tasted pretty good. And besides, we were roughing it. Ayups.

I finally took it upon myself to write down my folks' way of cooking lobster instead of calling them up all the time, whenever I throw a few into the pot, wherever I might be. Here's what they do (oh and if there is some seaweed handy, throw that in too): 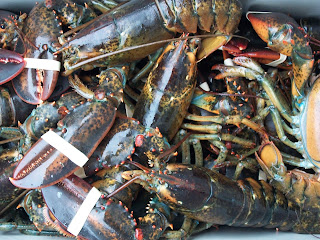 Figure on 1 1/4lb lobster per person
2 inches of water in a large pot will steam up to 10 lobsters
Bring water to a boil and put in lobsters by grabbing their backs (cut the rubber bands first from the claws and watch your fingers)
Cover and bring to a boil again and cook for 17 minutes (and as The Old Man suggests, if you've had one too many martinis as he might have at one point or another, and the trail of time is lost, tug at a feeler--if it pulls out readily, the lobster is done)
Meanwhile, melt at least several sticks of butter for dipping.

What To Do With The Shells Afterward

Our neighbor had brought over a copy of The Joy of Cooking as a gift and while leafing through the pages after dinner, I found a Lobster Bisque recipe and went to work. We didn't have all of the ingredients on hand that the recipe required so I did what I could with what was available and delighted in the casual nature of making my own Friendship Bisque.

I fished out the best shells from our lobsters, the larger claws, and tails, the bodies still full of tomalley, for more flavor, and cooked them down, back in the boiling water with another cup or two of fresh water, onions, celery, dried parsley, and a chopped tomato. Three capfuls of white vermouth went in as well, all simmering for well over an hour. I strained everything out eventually. Click here for more stock ideas.

As I didn't have any heavy cream, as the recipe suggests, I whisked in perhaps a little more than 1/4 cup butter, mashed with dried tarragon, to make up for the absence of bay leaves, cloves, and nutmeg that are also suggested.

A 1/2 cup flour went in, along with 3 cups of heated (2%) milk, and I stirred until smooth. Once
cooled, it went into the refrigerator. The next day, I patiently simmered my concoction against a backdrop of rain*, as it reduced somewhat, turned a rich chestnut brown and became an elegantly shimmering, subtle bisque.

I would have liked a fine mesh seive to remove the white bits that simmered off of the lobster shells and perhaps would have liked to have had a few other ingredients on hand, but I was trying something new, a Friendship Bisque--and as I mentioned before, we were roughing it! 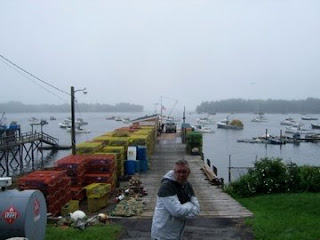 *Honestly, except for a few trips here and there to scenic Camden and then Thomaston to check out the Jail Store, have a few oysters at Billy's Tavern, and later on go to Moody's Diner in Waldoboro for a fried clam roll and a hefty wedge of coconut cream pie, there wasn't much else to do over the rainy days. I did read The Catcher in the Rye though (for the third time, I really did), and obsess over an infuriating Sunday Times crossword puzzle, which I finally finished, along with my leftover coconut cream pie.
Posted by Peter Sherwood at 9:57 PM