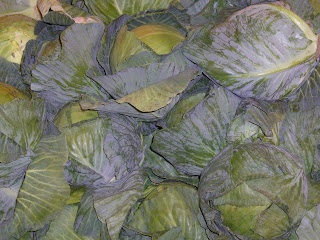 Galumpkis! The Italian family of Bastianellis who lived across from us on Arch Street when I was growing up probably didn't make this Polish dish of stuffed cabbage, but whenever I try my hand at it, I am always transported to their busy kitchen, and the wonderfully fragrant aroma that was unfamiliar to me at the time but used to dance about their entire house. I suppose now I was probably inhaling the tomatoes and peppers that were always simmering in some sauce on the stovetop. Similar culprits used in this recipe are what I think summon the ghosts.

My friend Ed Urban told me about his galumpkis some years ago and I find them to be absolutely delicious. We've tried them in turns baked in Pyrex or simmered in a fine pot. With the latter preparation, I've also floated some sliced Granny Smith apples to sweeten the pot and topped with some sour cream when serving, first mixed with a little of the steaming cabbage water. Try using red cabbage as well, or both for a wonderful presentation.

Ed writes: "Whilst in Poland a few years ago, I did notice the galumpkis were more traditionally served in a thick white gravy. The tomato sauce was a bit of an Americanization but as Ragu was pretty much the only sauce when we were growing up [in Pennsylvania], that's what was used. But these days, any jarred will do. I remember that my grandmother would simmer them in sauce instead of bake them, so she would use toothpicks to hold them together and she would more often than not have the colored toothpicks, which would bleed into the sauce creating some of the most bizarre psychedelic colors. Still delicious. From my mom I learned about blanching and deveining the leaves, then baking, thus not needing the toothpick as they 'rolled' much better."

Whether you bake or simmer in a pot, above all else, enjoy!
Posted by Peter Sherwood at 10:44 AM