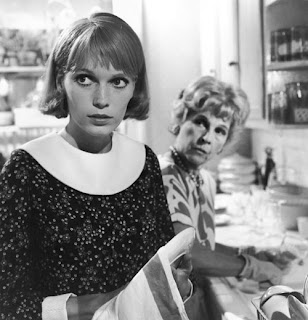 If you've ever seen Rosemary's Baby, one lesson well learned is never have Ruth Gordon over for dinner! Apart from noxious tannis root, I'm not sure exactly what was in the "Chocolate Mouse" she served dear Rosemary, but here is a wonderful recipe for Mousse au Chocolat from Julia Child's The French Chef cooking show that will have your guests shrieking for entirely different, far more appealing reasons. It's darkly delicious, quite wonderful and can be made the night before serving your guests and frozen--but I think just chilling it the day of your affair is even better. Get the ingredients in order and measured ahead of time and have your selection of proper pots and pans prepared before diving in as you'll need many of them to make this marvelous mousse and will want everything at the ready. When it came time to whisk the yolk mixture in the bowl over the pot of hot water, I did that by hand (whisking away for about 15 minutes until reaching what I felt was the right "thick and creamy" consistency), but for the rest of it, I confess I spared myself the workout, instead relying on my KitchenAid mixer for assistance, alternating beater and whisk attachments!

Ingredients
6 oz. semisweet chocolate, cut into small chunks--perhaps even use the morsels instead
1/4 cup dark rum or orange liqueur--I used both!
4 eggs separated
3/4 cup sugar
1/4 cup strong coffee--use what you have and let it sit for a while to find its strength
8 tbsp. softened butter, cut into chunks
1/4 tsp. cream of tartar
Pinch of fine salt--try sea salt
1/2 cup heavy cream--although this recipe calls for a piped rosette of cream to top the mousse, the already luxuriant dessert hardly needs it!

Method
Combine chocolate and rum in a small pot; nestle it inside a larger pot filled partway with boiling water. Cover smaller pot and set aside to let melt.

Beat egg yolks in another small pot until pale and frothy. Combine sugar and coffee in another pot; cook over medium heat until dissolved, 5-6 minutes. Pour into yolks in a stream, while whisking; set aside. Pour water into a large pot to a depth of 2" and heat over medium-low heat until hot but not simmering. This amount of water is important as eventually I almost submerged my eggs when nestling the pot in the next step! Nestle pot containing yolk mixture over pot and cook, whisking vigorously, until thick and creamy, 8-9 minutes. I found this took more like 15 minutes. Transfer yolk mixture to a clean bowl; beat with an electric mixer until cool, about 5 minutes. KitchenAid to the rescue again! Uncover chocolate mixture and stir; add butter and whisk until smooth. Fold chocolate-butter mixture into yolk mixture; set aside.

Beat egg whites in a bowl until just frothy. Add cream of tartar and salt; beat to stiff peaks. Stir one-fourth of the egg whites into chocolate-yolk mixture; gently fold in the rest. Spoon mousse into 6 serving cups or dishes. Cover and chill until set.

Here's what I didn't do, in anticipation of reveling in the sheer chocolate itself. Beat cream to stiff peaks; transfer to a pastry bag with a star tip. Pipe a rosette of cream onto each mousse.
Posted by Peter Sherwood at 9:35 AM