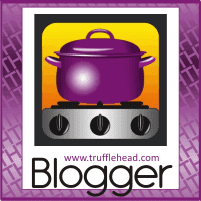 Here's a recipe from trufflehead, the first app for iPhone and iPad to feature me! Check out the site's video here.

Isn’t spaghetti squash utterly beguiling? Years ago, after foraging through the innards to discover those miraculous, sinuous strands that unfurl like the pasta for which this gorgeous gourd is named, I was completely hooked! Add kale, the most nutritious green there is into the mix, and here is indeed a recipe quite worth making. Any variety of Swiss Chard would work well for this too.

Any sort of gourd is not easy to cut through, so use the knife with the most heft that you have in the house. Heat the oven to 350 degrees while removing the seeds from a medium spaghetti squash, about two pounds, and then send to the microwave for 15 minutes until soft, cut side up. Let cool. Use a fork with abandon to scrape out the spaghetti-like strands of your squash into a rather capacious bowl. Toss out the rind.

I shirked the suggested skillet, thereby cutting out the middle man by using only an oven-ready gratin pan and a medium bowl: into the gratin pan went the one yellow onion (roughly one cup or more), five cloves minced garlic, several thyme stems (to be pulled out before serving), salt and black pepper with more than the tablespoon of olive oil that the recipe requires. Cook and stir now and then for five minutes until the onion becomes soft. Grab hold of the stems of your kale and pull off the leafy fronds with your other hand. Discard the stems. Wilt a ½ bunch of kale leaves (about four cups) for at least five minutes more and then remove from heat.

As the kale conspired with the other ingredients…

Gently stir squash into the kale mixture; blend in the cheese mixture. Even it all out and top with remaining ¼ cup Parmesan or as much as you’d like.

Here we go then, all ready for the oven.

Bake 35-40 minutes until achieving that golden, breathless perfection. Although the recipe doesn’t call for it, I’d add some freshly grated nutmeg the next time I make this wonderful dish.

Posted by Peter Sherwood at 1:17 PM