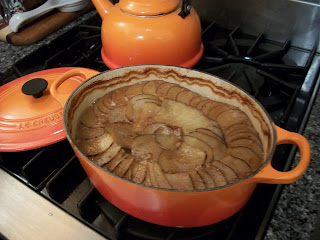 Whilst Baby was in London, he happened to see an episode of Lorraine, the British talk show hostess where her guest was fellow countryman and chef Dean Edwards cooking up a lamb hotpot. Once Baby told me about Mr. Edwards' recipe, we were both thusly moved to make it ourselves for a few friends.

My comments and conversions are in italics along with the hearty, outstanding recipe below.

The table was set with an air of festivity and reasonable aplomb... 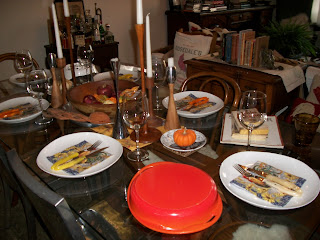 With the candles lit, the wine poured and the guests seated, Baby began by digging in to another meat pie! 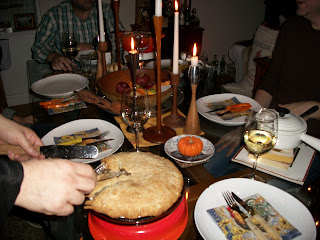 Method
Preheat the oven to 180 degrees Celsius/ gas mark 4. That's 350 degrees
In an oven proof casserole dish add a splash of vegetable oil then brown the diced and seasoned lamb pieces, this may have to be done in batches. Remove from the pan and set aside.
Add the sliced onion, thyme, bay leaf and carrots and cook until browned and softened - this will take approximately 5 minutes. Add the flour and cook out for a minute or so then add the stock and Worcestershire sauce. Bring up to the boil and season with salt and pepper. Return the meat to the pan and stir. We used an additional pan, lined it with potato slices and returned the meat and added the vegetable mixture into that before layering the potatoes on top in as described in the next step here
Layer on the potatoes in an overlapping fashion and season. Place a lid on top and cook in a preheated oven for 1 ½ hours.
After this time, remove the lid and brush with the melted butter. Return to the oven for 20-25 minutes or until the potatoes are crisp. Serve with some seasonal vegetables.

Posted by Peter Sherwood at 2:27 AM