I've been making Trenette col Pesto Genovese for years, toiling over the homemade pesto; boiling and peeling the potatoes; grating the Parmesan myself. Baby and I wanted a simple Sunday lunch recently, over a glass, or two, of a crisp white wine--so I cut to the chase and made the whole thing in about a half an hour. An accompanying, spirited salad composed of just lettuces and a resolute vinaigrette was entirely enterprising! 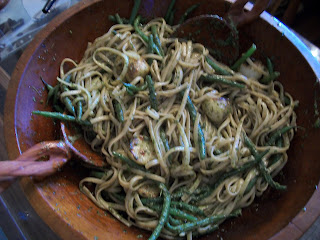 The actual recipe from Saveur is here. I found a good ready made pesto (or a pre-packaged brand name pesto such as Buitoni might work as well, I imagine) and added in already grated cheese to it. A bag of microwavable haricot vert green beans were ready in a snap. Instead of peeling the potatoes and boiling them, I purchased a can of Gefen whole potatoes, which I think are quite good! The Del Monte variety is also surprising.

So here's what to do: while the water for the 1lb. of pasta gets to a boil, halve the potatoes and broil them with a drizzle of olive oil until nicely browned. Mix the cheese into the pesto sauce. While cooking the pasta in salted water, put the beans in the microwave for the required 2-3 minutes and let sit to cool for a minute or so before handling. Strain the pasta, reserving a 2 tbsp. of the pasta water to bind the sauce, drain the oil from the potatoes and toss all of the ingredients together, adding the delicate potatoes in at the end. Top with more of the grated Parmesan, grind some black pepper to it and done! Here we have something that is truly elegant and yet quite hearty--and was just as delicious as it would have been had I doubled the time and effort. Although our Trenette col Pesto Genovese may be served anytime, I usually only make anything involving wildly evocative basil in the summer.

Posted by Peter Sherwood at 7:10 PM