As Baby is off to an exotic locale for work over the next few weeks, I wanted to create a celebratory bon voyage dinner. While plotting the simple, summery sit-down, I realized I had inadvertently composed a paean to Simon and Garfunkel with my four basic components: parsley, sage, rosemary and thyme! Since the classic tune from The Graduate is one of Baby's favorites, I felt I'd chartered an appropriate course for our courses.

I set the table in a gentle palette of green and cream with the towering bouquet of flowers and touches of gold found in the cups, saucers and plates. 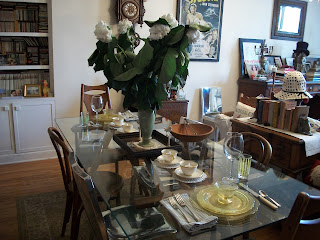 Patrician Depression plates revealed unbelievably intricate, hand-stitched antique doilies beneath that Baby and I found in Thomaston, Maine. When spread across the table, threading the centerpiece, the doilies also served as a magnificent runner. 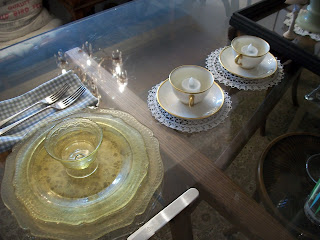 Battery powered votives in cups and saucers from a chocolate service set lent a genteel touch from a yesteryear, without any clotting wax! 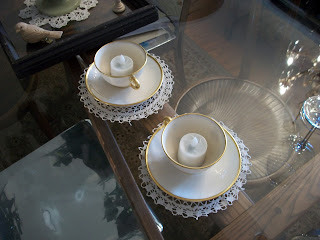 The Gin Daisy finds it origins from the Prohibition era libation, I believe. Though the cocktail features grenadine for sweet and club soda for fizz added to combat the gin, I just cut to the chase and shook extraordinary Brooklyn-distilled Dorothy Parker gin (infused with such things as cinnamon and hibiscus) with cracked ice, poured it into a martini glass and added a topper of sparkling SANPELLEGRINO Limonata, with a frilly mint garnish. Delicious! 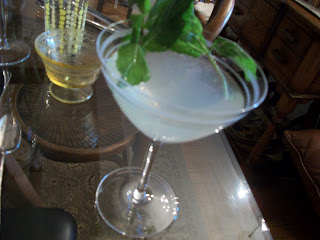 A simple parsley and mint salad was up first, the dressing easily made. Squeeze the juice from half of a lemon, incorporate a finely chopped shallot, and whisk together with a tablespoon or so of Dijon mustard and a good shot of olive oil (about half a cup). Season this with freshly ground black pepper and throttle in a self-contained vessel for about 30 seconds. A wicked trick and no blender required=nothing much to clean up! 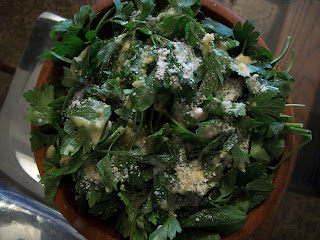 Pre-cooked polenta came out of a hefty tube, and was tamed by herb bouillon in a risotto pan. I had sauteed wild mushrooms in butter and black truffle oil in a separate saute pan and they were tossed in next, given due time to mingle. In the same saute pan I'd used for the mushrooms, I crisped a few fronds of sage that would be added in later. 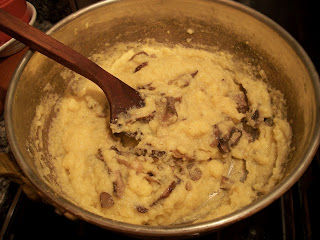 Warming up the grilled chicken that had been marinated in olive oil and rosemary, with a filigree of fresh rosemary... 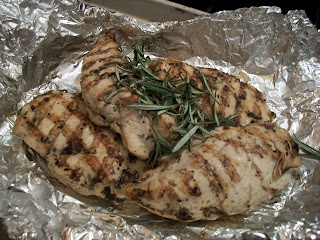 The polenta with wild mushrooms and crispy sage provided a fine cushion for the plated conclusion. 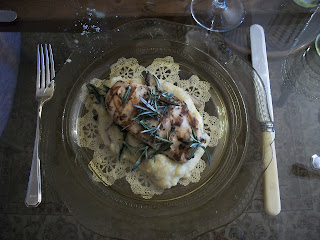 Frozen slices of white peaches (any pre-packaged bag of frozen fruit would do nicely too) went into the Vitamix blender for dessert, after they relented slightly to more temperate conditions. Spooned into small footed bowls, with a drizzle of blueberry honey and laces of thyme, our refreshing confection quite settled our Scarborough fare.