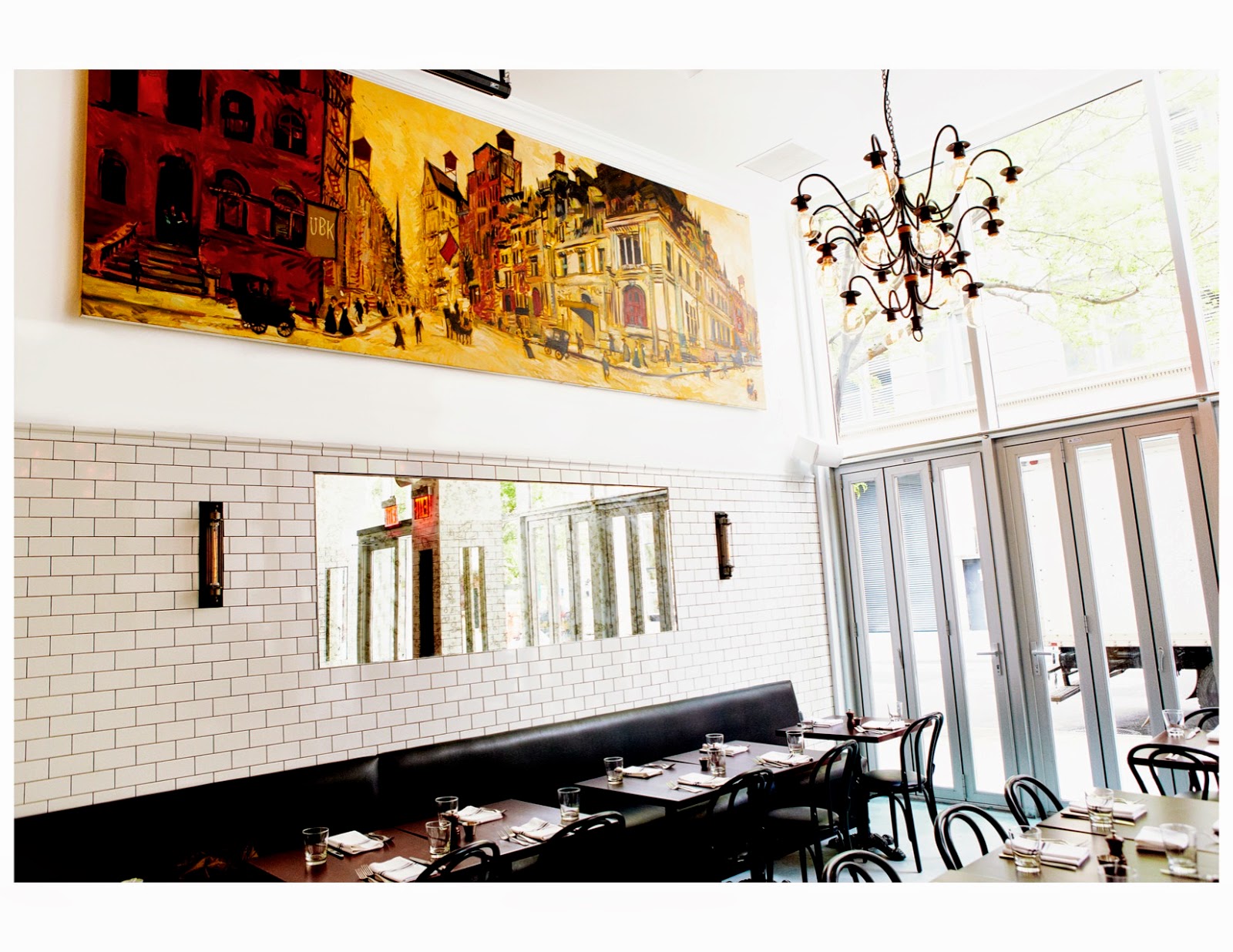 Union Bar & Kitchen is a great, casual hangout for a brew and a burger, with a tray of oysters perhaps, served with a side of civility. Chandeliers outfitted with Edison bulbs hover over the soaring space wrapped up in clean, white subway tile while bare Edison bulbs dangle over the roomy bar. Jonathan Renert wears a number of stovepipe hats as owner, executive chef and GM, and the restaurant itself refers to the union of flavors and people found there but it may also refer to the union of states as well--check out the marvelous portrait of Lincoln near the loo, the Lincoln's Storm specialty cocktail and the 21st Amendment (when publicly guzzling booze was made A-OK again) draught beer. Union Bar & Kitchen is not located in Union Square, however, as I first thought, but rather tucked away in West SoHo.

The Quick Bites:
Lincoln's Storm; reflected the temperamental weather (stormier than the drink!) as the folding glass doors were continually opened and shut. The cocktail though was a steady, even pour of rum, highly flavored with fizzy ginger beer and cool mint, and otherwise a highly sippable delight
East Side Cocktail;  I subbed fizzy seltzer for gin in this delicious summer drink, with mint and cucumber muddled in fresh lime juice
The Blue Point oysters were curious; watery as the evening outside, probably pulled from the waters of Long Island too soon to fully mature--but a few squirts of fresh lemon and a fantastic mignonette comprised of daikon radish and kimchi readily remedied this, and the oysters in their shells served as a vessel for the sauce and spared us the embarrassment of asking for a straw!
Bucket of steamed clams; served in a light cream sauce probably with some white wine. While the clams were decent, this New England boy loooves them simply prepared with drawn butter for dipping. I should have asked first, I merely assumed--of course
Caesar salad; flat and merely serviceable as an allowance of daily greens
Fried chicken; who cared about the salad, we had bigger chicken to fry! These juicy nuggets were well serviced by a judicious spray of lemon, already having been marinaded in such things as ginger, sake, and soy. Secret here is the chicken is dipped in potato starch, not flour, before hitting the fryer. Fabulous!
Tomr's Tonic Water; a most beguiling brew (it ain't Canada Dry), hand crafted with cinchona bark, herbs, spices and citrus that I asked for simply on the rocks. Look for it everywhere soon, I'll wager, and add it to your liquor-based drinks
Smoked Trout Deviled Eggs; won out over fries as a side to our sandwiches, smoky trout and creamy egg filling peppered with paprika were a perfect pick
The Morning After Sandwich; a twisty must-try version of a classic bacon/egg/cheese hangover combo with panko crusted pork cutlet topped with a fried egg, provolone cheese and tonkatsu sauce (similar to teriyaki sauce) all sandwiched on an English muffin. The accompanying nostril-whistling pickled ginger nearly killed my dining companion, but it didn't stop her from devouring the whole shebang
UBK Sirloin Burger; I had been hankering for a burger for days and this homey, grilled, medium rare meat-fest did the trick with bacon, cheddar, and frizzled onions on an English muffin
Peanut Crunch Chimichangas; a warm gooey mess with cream cheese got all over my face. I loved it. We subbed jalapeno-chocolate ice cream for plain old vanilla and suggest you do too.

Until Next Time:
Sauteed spinach that our sweet waitress raved about
Watermelon gazpacho
Smoked gouda on the burger