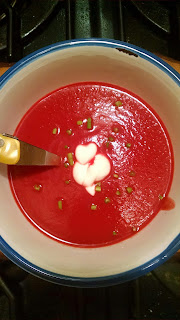 Chilled Beet Soup with Yogurt and Grapefruit
Serves 2
Open up a package of fantastic already peeled and cooked Love Beets (usually four beets) and quarter them. Add in half a sliced green apple, core and stem removed along with the white parts of two scallions cut into 1/2 inch pieces in a small-ish, sturdy pot with a tablespoon of olive oil (I used coconut oil), sweating for about 10 minutes. Add some water to barely cover, bring to the boil and reduce heat to simmer gently, until vegetable are truly tender. This does not take long. Add salt and pepper and throw everything in a blender, until a smooth puree is achieved. Add in about a 1/2 cup of fresh pink grapefruit juice and chill, covered! Overnight, is preferable, I think. Serve with drizzled plain yogurt and chopped green parts of scallions and parsley. Easy? You bet! Perhaps serve with a crisp white wine, as undoubtedly that intern I mentioned did. Do enjoy!
Posted by Peter Sherwood at 12:07 PM