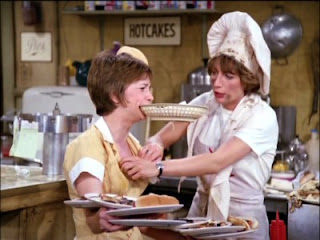 I first heard of Chicken Tetrazzini in the late 70's while I was in fits watching the hilarious Laverne & Shirley episode where they attempted to open a diner called 'Dead Lazlo's Place.' The clip is below but even before youtube I always remembered Laverne stuffing a whole chicken in a pot of boiling water in an attempt to make the dish. Now, shield your eyes from the SPOILER ALERT: Hopes for the diner didn't pan out and by the end Shirley (responding to Laverne's sweaty calls of 'Betty, please' and 'Pick Up, Betty' as you may remember) suffered a total collapse and ran out shrieking at the grabbing hands and demands of the unruly customers and a burned mess of 'hash blacks.' 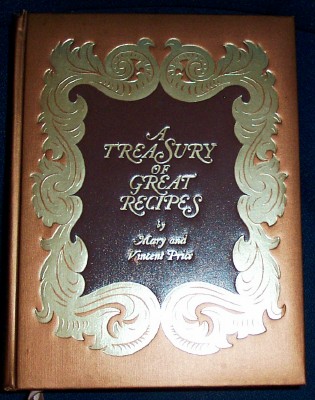 Somehow over the years however,  the dish lingered in memory ... then I happened to be poring through a grand, gilded-in-bronze edition of A Treasury of Great Recipes by Vincent Price (yes, that one--the celluloid ghoul of legend who also provided the cackle at the end of 'Thriller'). I discovered in its glorious pages a recipe for Emince of Chicken Tetrazzini au Gratin that he and his wife enjoyed at Sardi's. It may surprise you to learn that the Prices were international epicures and the cookbook reflects their culinary journeys, laboriously detailed with menus from some of the world's most historied chefs. But oh boy, was this glogging Tetrazzini loaded with fat on top of fat (ie. adding heavy cream to an already rich veloute sauce and then sour cream). No, no--although it may have been created for the opera star Luisa Tetrazzini ("when calories didn't count"), I have no plans of padding my bellows to thunder through a tempestuous Wagnerian epic. I enlisted the help of another, less frantic Betty instead, that old gal Betty Crocker came through. Armed with a cooked rotisserie chicken and low-fat cream soups (subbing for the veloute sauce), I easily prepared her much trimmed-down version of Chicken Tetrazzini, great for any night of the week and quick to go as well. So ... pick up, Betty! 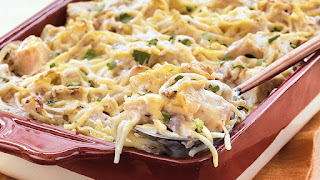 The link is here. So, my suggestions? Just shred that aforementioned rotisserie chicken, and for the suggested soups, use one can each of low sodium/fat Campbell's cream of chicken and cream of mushroom with a can of 2% milk and 1/3 reduced fat sour cream. Pre-sliced baby bellas fit the bill for the mushrooms.

And in case you'd like to watch the entire Laverne & Shirley clip, in its hilarity, click here!
Posted by Peter Sherwood at 12:29 PM