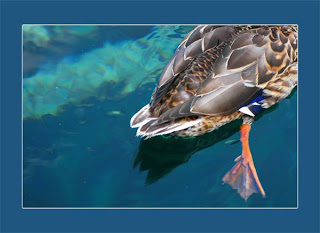 Tiny telephoned, telling me she was blowing into town, so I urged she come for dinner. Now, the hearty gal likes to eat--a lot. Of course, I wanted the meal to be special, too--so what seemed in order? Nothing less than a festive Duck a l'Orange, which always reminds me of the first time I came to New York, when my Dad took me to dinner at the glorious Algonquin Hotel, while I was in high school. I still remember sitting in the Oak Room with him, both of us nattily attired, ensconced in a banquette, starting with our plates of escargots. We didn't serve such things as duck in New Hampshire, that I was aware of anyway, much less dressed with something as profound as an orange sauce. But I recklessly ordered the duck and in a single, simple moment, created a memory.

I had never tried actually making duck before, although I have cooked a goose! Both incidentally required dry vermouth (a good use for it apart from waving the bottle over a dry martini) and when I made the goose, it was to concoct a New Year's Eve feast fit for a queen (he's actually a very nice guy once you get to know him). At that particular fete, caviar and blinis were up first, a Lobster Salad poached in Court Bouillion was next, courtesy of Michael Lomonaco's '21' cookbook. And as the Christmas holidays generally tend to speak Dickens to me (ghosts in full attendance!), a Goose with Gooseberries seemed appropriate as the centerpiece. I used a recipe from a Reader's Digest cookbook volume from 1973, Secrets of Better Cooking, that an elderly cousin (who has since passed, bless her), a woman very influential to me, handed down some years ago. I braised fennel and radicchio for complementary side dishes and served Red Velvet Cake as dessert. Of course, there was also champagne creating quite a good way to ring in the New Year. 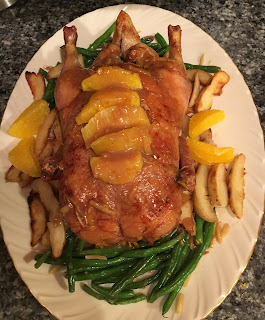 But back to the Roast Duck a l'Orange at hand! Looking to Julia Child's recipe in The French Chef Cookbook (The Nineteenth Show), I set out to find the fowl, which was no mean feat. None of the nearby supermarkets had duck but I did find an independent neighborhood butcher that sold the game five-pounder. Once I was back home, I peeled the fat off and pricked the skin as Julia says, much like I remembered doing with the goose, to release the fat. But unlike the goose, there was no basting involved. I salted the cavity of this bird, peppered and stuffed it with orange rind, which Tiny came over early to help with and supremed the oranges (peeling the rind and separating the segments from the pith with a paring knife). We turned the duck every quarter hour until cooked, allowing an hour-and-a-half at least. The orange segments then conspire with orange liqueur such as Cointreau to make the sauce. Orange bitters are also involved! You may also want to consider using Patron Citronge, I would like to try that next time.

We served French pitted olives in a martini glass as an hors d'oeuvre before serving a leafy salad (shorn red and green leaf lettuces with simple oil and vinegar dressing) as a starter. Tiny commandeered the sauteed buttery shoestring potatoes that Julia encourages as a side, which we also made with parsley and duck fat, as the duck finished. Now while one guest could never eat the actual duck or any sort of game (we made her a special Chicken Paillard), she did confess a desire to get into the bowl with the duck fat potatoes and eat her way out. I was so pleased with the potatoes and especially the duck, when the dish was finally presented. Not only was the sauce good, but the duck itself was truly, delicately infused with the flavor of the orange.

So what of dessert? I thought back to that dinner in the Oak Room, eating escargot and my first Duck a l'Orange, where I finished it all off with my first gigantic slice of of New York cheesecake. Bien sur! That was just what to have! Tiny brought a very big cheesecake, courtesy of Junior's that we could all share for dessert (at least that was the hope!). We toasted the whole dinner in honor of my Dad, who swore he was working out the train timetable so he could meet with us.

As wine continued to flow, we broke out the Barbra Streisand cds and into song as well. Baby capped off the evening with his unparalleled version of Goldfinger by Ms. Shirley Bassey.

Et alors, mes amis, a dinner of duck destined to delight and apparently, one that also inspires song!