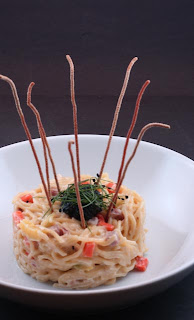 M.F.K. Fisher wrote vibrantly, wickedly, about love, death (and stew) amongst the molluscs in her seminal tome Consider The Oyster. In tribute to the great lady, I propose to humbly submit Praise The Pearl, in which I take the opportunity to post this sidebar to Evenings With Peter, simply lauding a culinary element that for one reason or other, I find to be fascinating. The posts may occur over the course of any given number of days, but one thing remains steadfast, on my part at least—the earnest hope that you enjoy reading them. So here's the first then, about Klee restaurant in Manhattan, and a dish that I'm quite taken with. 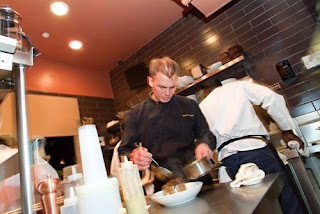 Daniel Angerer, of Austrian descent, is wildly busy helming the European American Brasserie Klee, with his sublime and gracious first mate Lori Mason right on deck. Angerer took Bobby Flay to the mat on Iron Chef in 2008; the rest of us are just lucky enough to visit his restaurant in Chelsea. His list of daily specials travels “through the foods of Europe (and America on Sundays)” but the Friday special is a particular favorite of mine. As I seem to be obsessed with carbonara at the moment, I am delighted with Chef Daniel’s entirely clever Spaghetti and Caviar Carbonara (although I could go on about Thursday's utterly mad Orecchiette and Escargot). Traditional pancetta is part of the plan, yes (house-made, by the way), but that's where tradition pretty much ends. He tosses in a bit of cream here, a little bit of carrot there, but there are no eggs involved, as tradition would have it anyway, and that’s no yolk—no, the divine fit of inspiration here concerns the coral-colored, precious orbs of rainbow trout caviar. Would eggs by any other name so shamelessly burst forth in the mouth with such a delectable salt?
Posted by Peter Sherwood at 4:11 AM