A Fine Kettle of Fish 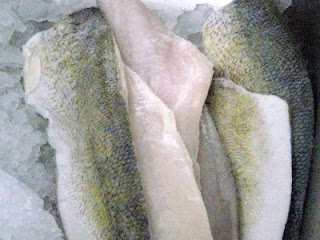 A little over a week ago, I observed Rosh Hashanah with Baby's family in Long Island, as I recently transcribed the events here, and this past Monday we broke the fast on Yom Kippur in Manhattan. Having been brought up as a Catholic, we'd have a single day of Christmas with a generally drunken bacchanal on the eve, and then we'd eat alot at Easter. Of course there is the trial of Lent where the Catholics are supposed to give up something like smoking, chocolate or soda for about a month prior but I don't think I really know anybody who ever did that. However, Baby's family and Jewish friends atone, fast and reflect and ultimately celebrate for what seems like weeks at a time.

I had been itching to make chicken livers with shallots and marsala and thought this might be a good thing to bring to the break fast--nothing like a good shot of iron, and a little wine, you know? I avoided somewhat of a gaffe when I spoke to our Yom Kippur hostess of my plan and she told me that meat is generally not eaten on this holy day: it's pretty much just fish. I immediately turned my thoughts to gefilte fish and a recipe I'd seen on Martha Stewart's show several years ago where the dish was served with beet horseradish. Now, I used to think of gefilte as the gray, gelatinous muck that looks like little brains bottled up for laboratory experiments on grocery store shelves but I remembered being so struck with this particular recipe on Martha's show and the idea of making it fresh that I wanted to try my hand at it. So finally I had the chance. Baby told me that people rarely make their own gefilte fish and that bringing it homemade to the table would be a real treat. I just hoped that I would be successful in the execution, as I had no idea what it was supposed to taste like.

We bought the pike and whitefish on Saturday, all six pounds of it! There was more pike than whitefish, which concerned me, as the recipe suggests an even amount of each but the fishmonger assured us it would be fine, as whitefish has a very persistent flavor. We asked that he grind the fish for us, and reserve the head and bones for the stock. Once we purchased the rest of the ingredients, when we got home, I took off my watch and set to work with sheer abandon.

Before long, I was up to my neck in ground fish and chopped onions, with dashes of sugar, kosher salt and matzo meal thrown in, mixed well with several large eggs and water to bind everything together. The fish mixture sat in the fridge for about two hours, until firm.

I felt like a char woman: I hacked apart the fish bones with kitchen shears and tossed them with the heads into a pot with quartered onions and carrots (there was no peeling, they went in skins and all) and ripped celery into pieces with my hands. A few cloves and dill sprigs followed, and everything was just covered with water and brought to a boil to make the stock. It simmered for about 45 minutes and was a delight to sniff as the fish and vegetables became acquainted. We strained the solids from our stock and set aside.

In the meantime we grated fresh horseradish and peeled cooked beets, and tossed them together with a little salt and cider vinegar, to serve as the delicious, pungent accompaniment.

When the fish mixture was ready, we dug in, frequently wetting our hands with cold water to form delicate oval shapes (about 2 tablespoons each) and gently placed them into our reheated stock, to which we had added a few carrots. We did this in batches, 20 minutes each. Once they had all cooked, we arranged in a large baking dish, poured the broth over the fish, covered and let it cool. The whole thing went into the refrigerator and we awoke the next morning to gefilte fish, suspended in a perfect jelly.

At the break fast Monday evening, the spread was full out--we had creamed herring, pickled lox, smoked salmon, whitefish salad, an assortment of bagels, a variety of flavored cream cheeses, incredibly ripe tomatoes, egg salad, Baby made deliciously inventive wasabi tuna devilled eggs topped with caviar, and ice buckets were filled with white wine and prosecco for mimosas. I humbly set out leaves of rich purple radicchio on a platter topped with my gefilte fish and a little of the jellied broth. The beet horseradish went on one end, with a side of chilled jullienned carrots on the other for balance. Traditionally, the carrots are cut into coins, but being the goy, I wanted to assert just a touch of something different. I forgot the dill garnish.

So how did it taste, this journey into the unknown? Well, I loved it. It wasn't too fishy, the onions mellowed, the texture seemed just right and the beet horseradish did the trick. After several compliments (including one from our hostess) I think it's fair to say it was a success. What I took most to my heart was when a guest I had just met told me, "This is better than what my Grandmother used to make."

Imagine? Needless to say, I was rather verklempt.
Posted by Peter Sherwood at 9:27 AM