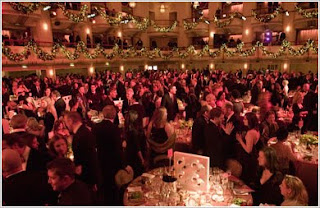 Interior Design magazine is celebrating the 25th Anniversary of the Hall of Fame on December 2nd. I've had the privilege of working with the magazine and assisting the Director of the Hall of Fame in throwing the annual awards party at The Waldorf=Astoria since 2002. The glittery evening tops the list of events in the industry as the revered publication inducts select designers to join the ranks of their celebrated comrades, hosted by Interior Design's natty publisher Mark Strauss and vivacious editor in chief, Cindy Allen.

My favorite contribution to the always glorious night is creating the attire of the menu, suiting up what the guests will eat and the wines they'll drink. Reggie and I met in the lobby in the early afternoon, as we do, to meet with the gracious Jim Blauvelt, who once again led us to the belly of the Waldorf: the kitchen. We were seated at the chef's table and well taken care of as we worked out what was to be served this year.

We begged the staff to let us try some of the fried chicken that they happened to be cooking up for Bette Midler's Hula-Ween Ball. We actually got to try it this year even before The Divine Miss M did; one version was with buttermilk and lotsa pepper, flour and corn flakes. Another version added whole grain and Dijon mustard into the mix. Both were absolutely sumptuous and Hula-riffic.

Sips from a Canyon Ranch chardonnay, a Kenwood Sauvignon Blanc and a Bellerache Cotes du Rhone Blanc set the ball rolling as we lingered over our greens first and then other things, to wit:
Spinach Salad with pancetta, polenta croutons, hon shemijji mushrooms and a sherry vinaigrette; Organic Greens with a fantastic goat cheese brulee, an oven-roasted tomato, and carmelized endive with a honey lemon dressing; and a traditional Caesar Salad.

Tastes of red wine included a Cabernet, Pinot and California Zinfandel as we debated main courses.

So what did we choose?

There was no doubt that the crisp French Bellerache Cotes du Rhone Blanc was our white to pair with the meal; the others were fairly indiscriminate. The Dancing Bull Zinfandel from the Rancho Zabaco vineyard in California was the winner for the red.
Organic Greens won out over the other salads. Goat cheese brulee, anyone? The Caesar had a great dressing, but the romaine was pale and a far less appealing plate.
While the Herb Roasted Chicken was really good, and the ricotta gnocchi in cream sauce topped with the bacon was delicious, we'd served it in past years, so we embraced the new and went for the Parmesan Crusted Chicken. We chose a red onion marmalade to replace the roasted tomato that came with, as it was already in our salad, and would have been repetitive. I thought that was an excellent idea.
Classic Waldorf Red Velvet Cake had to be our dessert; it was created at the Waldorf after all and seemed entirely fitting. Besides the cream cheese and mascarpone icing had us dancing on the ceiling.