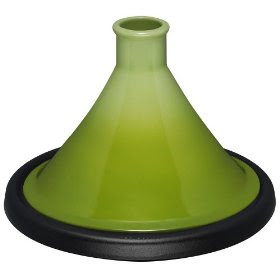 I bought a beautiful Le Creuset Moroccan tagine last year even though I knew neither Baby nor I had the vaguest idea of what to do with it; I just loved looking at it and was guilty of covetousness for a few years before I eventually succumbed, enamored with the enameled dome and the kiwi and lemongrass sunset that gently fades upward into a paler shade of green onyx.

So yes, our initial recipes didn't turn out so well--chicken and lamb dishes fell flat, which was odd, considering the host of sprightly ingredients which included olives, preserved lemons, and pungent Moroccan spices--and as a result, thoughts of making Sea Bass and sake in our tagine went by the wayside as well.

A friend who grew up in Morocco knew of our culinary conundrum and presented us with an incredible solution: his own Moroccan mama was in town and she was more than willing to show us just how to serve a proper tagine with a few traditional side dishes.

Mama speaks French and Arabic: I speak limited French, she limited English, but we managed to communicate with one another just the same, the kitchen being a universal ground, I suppose, with calls for a pinch of saffron here, ground ginger and cinnamon there. Her son translated otherwise over pots and pans with laudable panache.

I was absolutely delighted, watching the furious flurry in the kitchen, while still tending to our other guests. Working with a cubed leg of lamb (bone-in), Mama added ginger, hefty grinds of black pepper, sea salt, and saffron for color as much as flavor, ground cinnamon, coriander and garlic (she quickly peeled off the skin with a paring knife before grating it with our Microplane), making a fragrant foaming broth of the whole thing with water.

While it all simmered, she boiled prunes, apricots, dried figs and blanched almonds separately, peeling off the skins, before sauteeing them.

Mama had already made lightly fried Pastillas, "triangle shapes" with ground chicken, almonds, golden raisins (I think), and spices wrapped in phyllo dough, and fried them lightly in vegetable oil. Such a burst of flavor, really incredible, topped with ground cinnamon.

Pepper salad was suprisingly good (my haunches usually go up when I hear anything to do with peppers) and I loved the gently cooked carrots tossed with parsley, coriander, garlic, cumin, lime juice, and paprika.

The lamb was grandly served in the tagine after all, with the boiled fruit, almonds, and the thickened sauce on the side.

In honor of the evening, to round out the meal, I made a Moroccan-inspired Pineapple and Banana Couscous Pudding with diced bananas sauteed in butter and brown sugar that along with candied pineapple and couscous were folded into whipped heavy cream and served in individual parfait glasses, garnished with sprigs of mint.

I hope nothing was lost in translation when I hugged Mama goodbye at the end of the evening, flustering through my French, "Quel plaisir! Je suis ravis!"

What a pleasure! I am ravished!