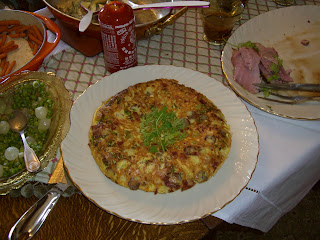 I served my Jews ham on Easter, which happened to coincide this year with the last day of Passover. They couldn't eat any of the leavened items such as the croissants and Pepperidge Farm cake but boy did they chow down on practically everything else.

The ham in question was prepared from Martha Stewart's Menus for Entertaining, featured in the Celebrating Spring section. I've been wanting to make this for years! After securing a really good smoked ham from our local market (10 lbs for only $15!), I made small incisions all about the ham, stuffing them with garlic and alternately sprigs of thyme, chervil, and basil leaves. I laid out bunches of parsley, chives and tarragon in a roasting pan with slices of blood oranges topped with basil and a few dried bay leaves and smashed cloves of garlic still in their skins here and there. The studded ham went on top, I poured a bottle of white wine over the whole thing and it went into a 325 degree oven for 2 and 1/2 hours covered in foil--the first and last half hours were foil-less, to brown the meat. After removing the ham from the pan, while letting it rest, covered for a 1/2 hour before serving, I strained the cooking liquid into a sauce pan and simmered it down by half. The resulting sauce was little salty but the ham was absolutely delicious anyway, quite on its own! 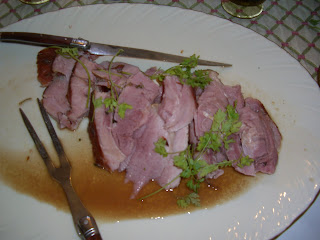 We also served smoked salmon, whitefish salad and I made a meat pie. 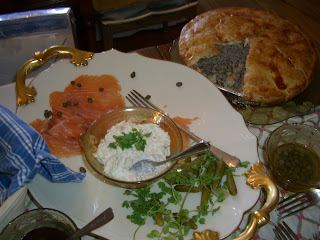 Homemade croissants from Cuisine at Home took three days. I even started early in case they were an utter disaster and had to buy some Pillsbury Grands or something. Feeling it was going well, I froze them and then thawed them overnight before serving on Sunday. Yes, they were tricky to make the first time out, but I was so pleased with the results I would definitely make the effort again.
The Basic Steps:
DAY 1 Make your dough and butter block (three sticks of butter put together and pounded flat). Let sit overnight.
DAY 2 Roll out the dough to a 12" x 15" rectangle, or something reasonably similar. Place butter block on top, folding top and then bottom over, like a business envelope. Do this twice, with 35-45 minutes in between. After the third time, leave it in the refrigerator overnight.
DAY 3 Roll out the dough to an 11" x 23" rectangle. Cut the dough in half horizontally and then cut the halves into 3" x 5" rectangles, cutting those into triangles. Roll them up, coat them with egg wash and put them in a 400 degree oven for 18 to 22 minutes, taking care that they don't burn.

Here they are, fresh from the oven... 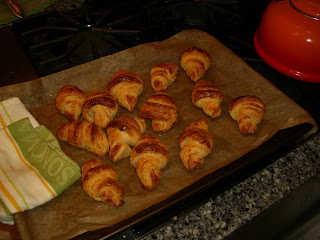 ...and like a proud Papa, I delivered them to the table! 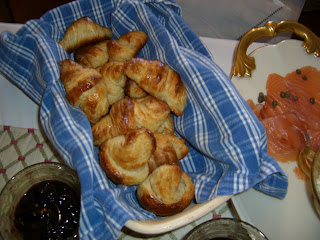 Another glimpse of the Butchers' Frittata. Thanks to the Williams-Sonoma pan, this hearty 10 egg dish with sausage, bacon (I subbed for ham), mushrooms, white cheddar cheese and scallions was most eggs-ellent. 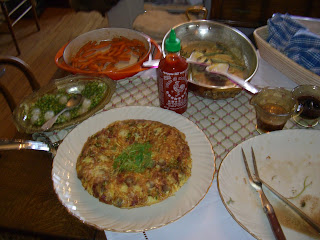 So what are those side dishes lurking about (note the ham is gone)? Roasted carrots with cayenne pepper in an orange glaze with mint; roasted asparagus tossed with lime juice and olive oil, topped with bearnaise sauce (I used a package of the Knorr mix--much easier much cheaper, and pretty good!), peas in butter sauce with vermouth-soaked cocktail onions.
Here's the Pepperidge Lemon Layer cake my guests devoured. I would serve this store-bought cake to the Queen of England were she ever to visit. I love it, always have. Here, I dressed it up with some outrageously ripe blackberries. 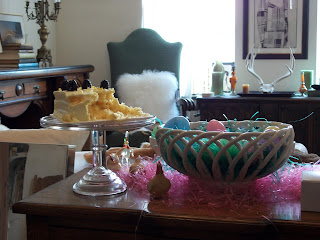 I put all of my eggs in one stoneware, oven-ready basket, used here purely for decorative purposes, and as a vessel to hide M&Ms and Starburst jelly beans. Rather pretty, don't you find? 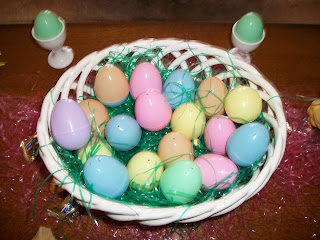 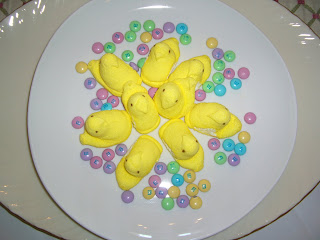