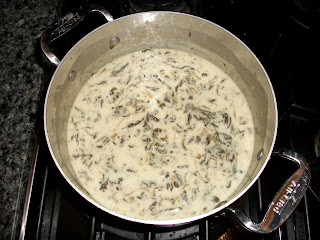 Long about the time I was in high school and somewhat beyond, Pepperidge Farm used to make the most delicious Vichysoisse to which I used to add thyme. I've since made my own version, chopping the leeks, boiling the potatoes and whatnot, but in a pinch I go for Campbell's Cream of Potato Soup. I still add thyme and ever since I saw Madonna's Truth or Dare movie with that curious scene when she's on the phone slurping something out of a tureen that I thought was spinach, that goes into the pot as well. A friend recently informed me that Madonna was actually having miso soup with seaweed. I've never made that but here is my recipe for Chilled Potato Soup with Spinach that I would like to propose as an absolute delight for summer. And yes, you can still make your own Vichysoisse and perhaps think to add thyme and spinach!

Chilled Potato Soup with Spinach
Serves two hungry people
Ingredients
1 can of Campbell's Cream of Potato Soup
1 can of spinach (I like Popeye's!)
1 cup of milk (2% if you'd rather)
2 teaspoons of thyme
1 teaspoon freshly ground black pepper
Several grinds of salt

Method
Over a low flame, add the can of soup to your pan and whisk in the milk. Continue to whisk occasionally, adding in the thyme. When the mixture becomes warm add in the can of spinach and let them get acquainted. Simmer slowly, tossing in the pepper and salt. Once heated through, let cool by placing the pan near an open window or something--when you can lift it without using oven mitts, put in the refrigerator to chill it thoroughly, at least two hours or so.