Remembrance of Repasts Past 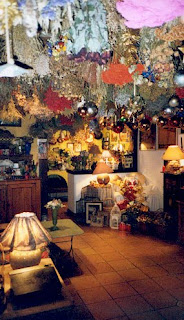 I joyously recall the Thanksgiving weekend some twenty-odd years ago spent at Hotel de Nesle nestled in the fulsome bosom of Paris. I had never been out of the country before, much less engaged in such a reckless a time in France over such an American holiday. I actually had a rare, bloody steak on Thanksgiving and red wine--what a thrill for a New England boy to be in Paris! How my young heart pounded, having emerged from Le Metro to gaze upon the City of Light, the breath of the city filling my lungs. We pulled into Hotel de Nesle on a Friday afternoon off the boat from London and what a trip indeed! Redolent of hippy incense, our hotel seemed more of a moony halfway house for the misbegotten, but it was so utterly charming too, and I remember feeling at the time that I had walked into a sort of dreamy Klimt painting.

Before we made a brisk trek through the Louvre during the day on Saturday, and had Thanksgiving dinner that night, I embraced Le Petit Dejeuner Parfait on just such a simple morning. If the best things in life are free, or at least included in the number of Euros (francs at the time) spent at a hotel stay, so be it. I had the best breakfast of my life in Paris at the Hotel de Nesle--a steaming, hand-painted bowl of strong coffee with creamy milk tipped in anticipated the freshest, crispy French bread, served with strawberry preserves which I slathered with a rich bright yellow butter that rivaled the rising sun.

I was just beside myself as you may well imagine, et maintenant...ah, mon coeur se brise encore!
Posted by Peter Sherwood at 8:43 AM