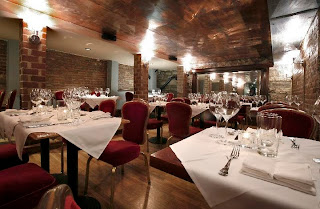 Bar Henry is a little hard to pick out to be sure, but thanks to the newly installed bright red awning announcing ‘bistro’, the challenge is somewhat diminished. This is a great neighborhood place with a wonderful bar and the whole thing feels like it’s been a comfortable friend forever. The red velvet banquet chairs in the dining room were plucked from the old days at the Plaza and lend a certain rag-tag grandeur to the proceedings with hardly a vestige of the smoke-filled Zinc Bar which formerly occupied the space.

We grew readily accustomed to the Henry’s Dog Cocktail ($14) with Tito’s vodka, dry and sweet vermouth and cherries soaked in brandy before moving on to some wine from their extensive list—and take note, most labels may be sampled as half bottles as well. As we sipped on an Australian Betts & Scholl Reisling ($49/bottle, $25/half bottle) we slurped down a few Oysters ($2.50) with an excellent ginger cocktail sauce: the Beau Soleils were like velvet brine, while the Malpecs had a fuller flavor.

Endive Salad ($8) was perfect for summer, with a fine balance of watermelon, feta cheese, almonds for crunch and a pure lavender vinaigrette. Organic Bedeviled Eggs ($5) weren’t hard to take either, with a fair balance of paprika and truffle oil. Earthy Chicken Liver Mousse ($11) was creamy, served with raspberries and a chiffonade of chopped dates. Short Rib Tacos ($12) wrapped in corn tortillas stopped the show—how toothsome and delicious!

Naturally with our entrees, more wine followed. The Austrian Nigl Sauvignon Blanc ($68/bottle, $34/half bottle) was most unusual, with a flinty hint of asphalt and a taste of gooseberries flocking to the palate. Chicken Under A Brick ($19) is an absolute must, with wilted kale and lemon pan jus. We found the Branzino ($25), a special of the night, to be wonderful, with crispy skin and a frizzle of leeks on a healthy bed of corn, tomatoes, squash, shallots, epazote and a bit of butter thrown in for good measure.

When it comes to neighborhood dining, the bar has indeed been raised!

First published in Next magazine.

Posted by Peter Sherwood at 1:41 PM