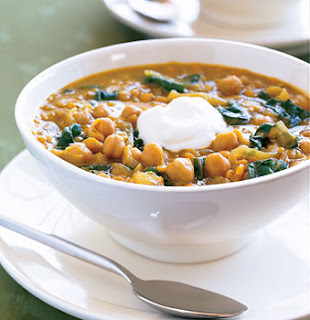 This Swiss Chard Stew from epicurious.com (Bon Appetit, December 2005) with curried red lentils and garbanzo beans is extraordinarily good. Making it also happened to effectively dispatch a number of things we already had in our cupboard such as several cubes of vegetable bouillon, lentils, cayenne, and curry powder. We didn't have red lentils, so I used the green variety, cooked until tender, and although this recipe calls for canned garbanzos, I used a pound of dried, simmering them independently first, which lent a nice texture to the dish. We had a bunch of fresh kale patiently waiting in our crisper, so I subbed that for the chard. A hint: to remove the stalks, just grab onto them with one hand and rip the leafy fronds off with the other. We also used a little creme fraiche instead of the yogurt called for as that was what we had on hand. Such a warming dish for winter and very easy to make. Just don't go overboard in devouring it when it is placed on the table--as you might well imagine, it is very high in fiber!