An Invitation to Murder 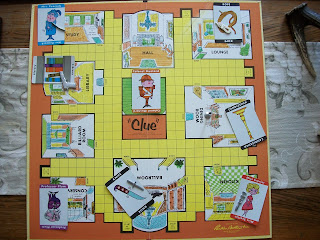 My friend Bear loves a good murder and over the last few years endeavored to tackle all of Agatha Christie's novels (totaling somewhere around 80) and did. So when he had a recent milestone birthday (he'd kill me if I told you exactly which), Moose and I conspired together to create a celebratory murder mystery weekend. Basically I'm talking about a fiendish bar crawl plotted out over the course of a Saturday afternoon.

The affair began with a mysterious letter on Nancy Drew stationery that he received in the mail a few days ahead of time that held clues we wrote of where it was all to begin...
"Sidecar, Mainbrace, Between the Sheets, all of the above or none
Be on the sundeck for the noonday gun
Remember monsieur, everywhere there is Evil Under The Sun."

This was the first of the clues that would lead him to the various venues that tapped upon Christie's extraordinary canon and where the "murder weapons" awaited him. We started out at my apartment with a vintage Clue board game spread across the coffee table and then onto the sundeck, where Evil Under The Sun inspired we murderous hosts. I had classic, chilled cocktails at the ready, which included a White Lady, Sidecar, Mainbrace and Between The Sheets, as referenced in the film. An utterly bizarre platter of appetizers including some smoky dogs and maraschino cherries were stabbed with skewers and canapes were thrown about outfitting half of an orange, in my attempt to recreate the cocktail party scene in the film too, as seen here. 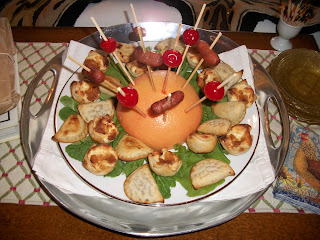 No time to linger! Bear cleverly figured out the next location, one of his favorite haunts, The Rusty Knot with this clue:
"Sometimes the ropes that are tried to be tied are better left undone
And with so many knots still quite tangled, we find in time they're loosed one by one
To discover...And Then There Were None."

And what do you imagine he should he find there as a murder weapon? Well, a copy of Alfred Hitchcock's Rope on dvd of course!

Hudson Bar & Books provided respite after discovering the secret in this message:
"Who would suspect these days with everybody being so arbitrary
One picks up a drink while stopping to think
Only to find The Body In The Library."

The weapon revealed was the Beatles' Revolver cd!

The following confounding bit of collusion proved to be the most difficult destination, as Bear had never heard of the joint and we had to clue him in to find Bell Book and Candle--but it proved to be one of the funnest places we went!
"It's Pyewacket that's causing such a racket but don't go searching just for smidgens
Grab a thing to ring, to read, to light
And find the culprit Cat Among The Pigeons"

We were going for a candlestick here as a weapon, a blunt instrument so often found at the hands of a murderer, but we resorted to something less dastardly, a dvd of the film Bell, Book & Candle starring Kim Novak and Jimmy Stewart.

We ended up at the Jane Hotel lounge for more cocktails, in honor of the greatest female sleuth, Miss Jane Marple, as created by Agatha Christie with this clue as evidence:
"Although on the water, it's not quite The Botel
Find clues from the first lady of crime, when trying to find the reason and rhyme
At a place such as Bertram's Hotel."

There Moose handed over the final weapon to the birthday boy, an engraved pocket knife from Tiffany's with his initials as well as proof to commemorate the date. But unlike so many mysteries, we gleefully confess that there were many witnesses for this particular prosecution--which ended up being very well executed!
Posted by Peter Sherwood at 2:02 PM