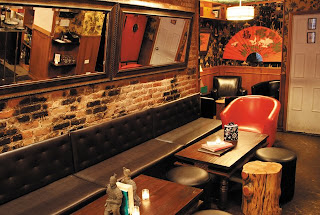 Should I one day create a list of my favorite things, pagodas from the Far East and barrels of mischievous monkeys would surely be on it. So imagine my delight when I found both on the pattern of the linen wallpaper at L’Amant. The spot is a tiny wedge stuck into a corner just off of Greenwich Avenue where we eased into our comfy club chairs like we were in an illicit club car on the Orient Express. We enjoyed the tinkling piano and enchanting vocalist from the jazzy trio as we relaxed watching the curling flames from the faux fireplace underneath a looming decorative crimson fan sprayed with cranes and apparent flora. And in case you were wondering, L’Amant refers to French author Marguerite Duras’ novel set in French colonial Indochina, The Lover.
We could hardly wait to dive into the cocktails of the house, patiently crafted with a resurrected air from a glamorous era and exotic locales. Truffled popcorn, perfectly popped, was a fun enticement as we perused the list curated by a wonderfully obsessed mixologist. The Black Snake would have made Hemingway proud, with Earl Grey-infused gin, Pear William Purkhart and beguiling bergamot juice coiled around a sturdy orb of ice. At least, it warranted another round. The Mekong River, with apple-and-ginger-infused Wodka vodka, welcomed spring with presiding flavors of mint and cucumber—and had stronger currents than we first thought! (See recipe on p.44) The China Man, with Buffalo Trace bourbon, sherry, bitters and lemon, felt imprudent, so we decided we’d have to return another time for that.
It didn’t take much prodding for me to order a tray of fat Blue Point oysters with good old New England cocktail sauce and a ginger and scallion mignonette in delicious contrast. A bowl of mussels met our mollusks at the table, too, perfumed with ginger and bathed in a rich broth subtly enhanced by cream.
A gorgeous and judicious amount of mock Caesar dressing clung to the stiff frills of kale in the Halong Bay salad—and we noted that these greens provided a healthy dose of protein and vitamins, too. Thin-skinned vegetable dumplings—served with a scallion-soy sauce and a Heinz-worthy chili sauce—were delicious.
We slid past the beef sliders, which might have been a mistake, opting instead for dry, flavorless duck in the steaming shepherd’s pie that sounded so good on paper. While we appreciated the fact that it was served in a cast-iron skillet, the dish was a disappointment and the purported inclusion of foie gras was unnoticeable. However, the browned mashed potatoes on top were divine and we readily forgave any transgressions. We loved the sublime elbow macaroni and Parmesan cheese with a hint of truffles and a crispy top; indeed, mixing our mac and cheese with the mashed potatoes from the shepherd’s pie was a tremendously inspired idea.
There were desserts— such as warm chocolate cake and a trio of mochi confections (green tea, red bean and mango)—but we narrowly escaped, preferring instead to linger over the flavor of the scrumptious mac and cheese. Climb aboard L’Amant, drink wisely and enjoy the ride!
Short Order: Serious cocktails and simple fare makes for a great trip East.
Peter's Picks: The Black Snake cocktail; truffle mac and cheese; kale Caesar salad; the mashed potatoes on top of the shepherd’s pie
Peter's Pans: The bland duck on the bottom of the shepherd’s pie
Prices: Appetizers:  $5-$15; Entrée:  $14-$16; Alcohol:  wine, beer, full bar, specialty cocktails.
First published in part in Next magazine.
Photo credit: Gustavo Monroy