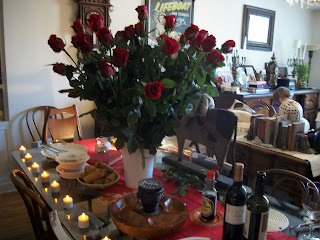 This month our merry band of players took on the mother of all musicals, Gypsy. Based around a ferocious stage mother named Rose, the show gloriously depicts the old vaudeville circuit and Rose's neglected daughter's later rise to epic fame in burlesque--none other than the legendary stripper Miss Gypsy Rose Lee. As that grand old show tune "Everything's Coming Up Roses" closes Act One, we had to have red roses on the table for a centerpiece and our friend was kind enough to bring such beautiful long-stemmed roses--bunches of them. Aren't they just gorgeous? 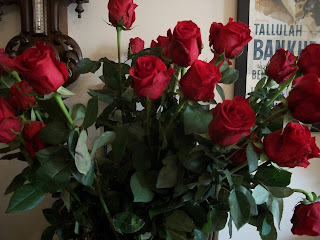 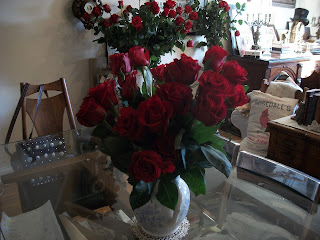 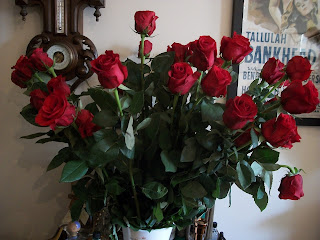 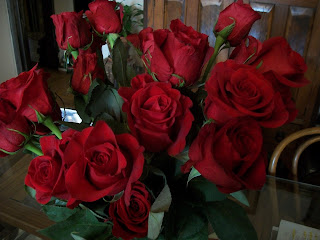 I lined up battery-powered candles to make footlights for our "stage" and lit a free-standing antique mirror to create a spotlight on the ceiling. Red paper dinner napkins made a great runway strip, er, runner. 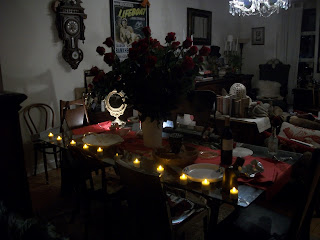 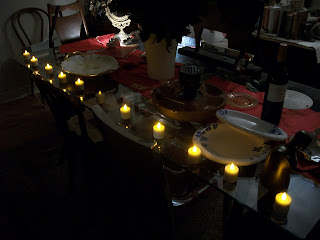 Since Chinese food is all they can afford through most of the show, we made what else? A Chinese buffet!

We ordered a few things for delivery too from our favorite local restaurant. In tribute to a song in the show that extolls the virtues of Chinese food as much as the booking agent who agrees to hire the girls for an act, we greeted our guests with eggrolls, still warm from out of the bag, and extra duck sauce and hot mustard. We also ordered sesame noodles, but I have a great homemade recipe too made with ramped up college-days-Ramen that serves two. The amount of ingredients are entirely suited to taste.

Method
Boil the noodles. In another pot add about one-third to one-half cup bouillon, garlic, soy sauce, sesame oil and the seasonings of choice, to taste. Mix in the peanut butter and add more water or soy as it thickens. Coat the noodles with Padangsauce and adjust seasonings. Garnish with sesame seeds or scallions, or both.

Inhabitants of our pu-pu platter included skewers of ginger teriyaki marinated beef skirt steak from Fresh Direct--all we had to do was run the sliced meat through with bamboo skewers (that had been soaked for a while in water so they won't burn) and cook the meat for a short time in the oven. An old friend sent me a wonderful recipe for chicken wings came from an issue of Gourmet magazine from December of 1999.

Method
Preheat oven to 375°F.  Divide wings between 2 large disposable foil roasting pans, arranging in single layers. Purée remaining ingredients in a blender and pour mixture over wings, dividing evenly between pans. Bake wings in upper and lower thirds of oven 60 minutes. Turn wings over and switch position of pans in oven, then bake 20 minutes more, or until liquid is thick and sticky.
Serve wings warm or at room temperature.

Roast Pork enlivened with red food coloring may be found here. From a Polynesian cocktail party we threw years ago!

In a snap we had fantastic ginger cookies to follow the curtain, aptly named Ginger Grants from Stud Muffin Desserts that everybody just loved. Flavors of orange and lemon with a ginger kick had a soft center and a sugary exterior.

And so, we take our bows; the final rose. Read more about roses that play an important part in my harrowing novel, the pale of memory available on amazon.com and barnesandnoble.com. Go to thepaleofmemory.com for more info. 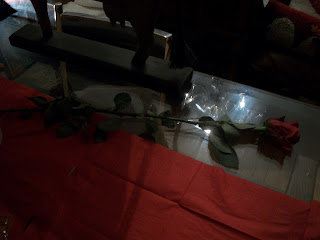 Posted by Peter Sherwood at 4:00 PM