The Sole Series - Part One, A Sunday Supper 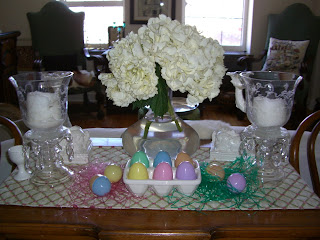 Julia Child featured three different sole dishes on The French Chef. With Easter upon us, instead of the usual hams and lambs, I thought of the miracle of the loaves and fishes and turning water into wine. So what else to make but Sole au Vin Blanc (The Hundred and First Show), fish fillets poached in white wine! But there would be no loaves for our guests as Baby's family is Jewish and was still enduring the rigors of Passover. No, the only bread we served was unleavened--Matzoh Brie with smoked salmon and braised onions.

It was quite a week for celebration! Two seders with Baby's family and friends in Long Island and frankly by the time Easter Sunday came around, I could barely move! Actually, that's not true at all. We had a wonderful time. I was very excited to make an early supper for Baby's family.

To tell you the truth though, out in Long Island I was shocked at some of the kids texting while we were at the table. My Father would never have tolerated that in a million years and neither did I. I told them to put their phones away. I honestly don't understand it; when I was their age, I was enthralled to be at the adults table, to hear their stories and hopefully engage them too. Schnitz (Baby's sister-in-law) told me that's just what kids do these days. Well, not at my table. When Girl and Boy (Baby's niece and nephew) arrived on Sunday, I confiscated their phones and told them they could have their phones back before they had to leave. I don't want them to only remember texting somebody (that they probably won't remember or still be friends with) when they are old and gray. 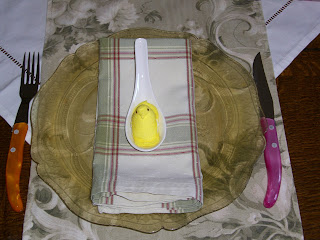 I can't resist Peeps and placed one on a Japanese ceramic spoon on every plate as a decorative what-have-you. The supper began with ramekins of Oeufs en Cocotte (baked eggs) from The Forty-sixth Show. It's an impressive dish that really is very simple but I didn't trust myself and overcooked the eggs the first time out. They still tasted good though, with herbes de Provence and a lash of salt and pepper. I love how Julia uses the word trembling, to describe the eggs when they are ready, however it left a little too much room for interpretation and I was disappointed as my eggs were overdone. So you know what? I'll know better next time. Forging on: 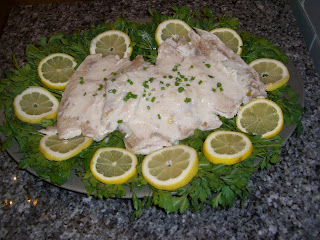 The good news is, the sole was stupendous! It's a delicate fish and the sauce itself is very gentle. It also struck me as very reminiscent of the 70's, perhaps when I first had a similar fish dish as a very young boy. Once I put the fish in the oven, after it simmered first on the top of the stove, everything moved very fast from kitchen to table. I messed up the sauce a little, I was to combine the butter and flour together first and then add the fish stock, and instead I just threw it all together at once, but it worked out just the same (I think). I stirred it furiously so as to avoid any lumps or curdling. Haricots Verts au Maitre D'Hotel (The Fifteenth Show), fresh green beans (that I boiled the evening before) tossed with butter, lemon and parsley was an excellent side. I added sliced almonds. Perfect. The Matzoh Brie that Baby made was also just great. I didn't understand that it was going to be similar to a hearty frittata of sorts, just wonderful, with creme fraiche. We served it with nibbles of smoked salmon and onions that we braised for hours it seemed, indeed might have been, with butter and olive oil until they were richly blackened.

For dessert, Baby and I took Boy and Girl to the prettily pink Sweetiepie done up like an early 20th century soda shoppe, which we just loved. We sat in an overgrown gilded birdcage by the window, to the envy of those around us. Hamburger Sliders, Shirley Temples and a perfectly giddy staff made us all feel like kids again. A creamy Rose Petal and Raspberry Fool was an utter delight, as were adorable mini-ice cream cones and a plate of cookies served with a pot of fudge.

Girl and I worked out the rest of the evening trying to master the dance moves from Beyonce's Single Ladies (Put a Ring On It) video.