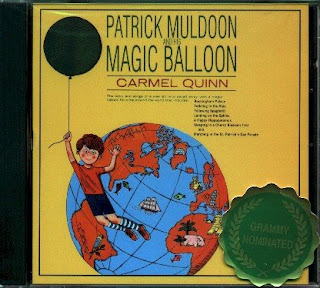 When I was a little boy, my kindergarten teacher, Mrs. McDaniel, gave me an album concerning Patrick Muldoon and his Magic Balloon, narrated and sung in an utterly charming and absolutely fascinating manner by the copper-haired Irish lass Carmel Quinn, who got her start with Arthur Godfrey and later, used to perform regularly on the Jack Paar, Ed Sullivan and Johnny Carson shows.

The story is, you see, that one day, a wee small slip of a lad (generally good and rarely bad) named Patrick O'Reilly McGinty Muldoon, discovers a tiny, shiny, green balloon bobbing ever so gently on a hedge. When asked by the balloon if he'd like to go flying somewhere, curiosity grabs ahold of Patrick as quickly as he grabs hold of the balloon string and away they go.
Together, they witness the changing of the guard at Buckingham Palace, yodel at a festival in Switzerland, greet Mario the Marionette in Italy, question what the Sphinx thinks, sing a Cherry Blossom Lullabye in Japan and land in New York just in time for the St. Patrick's Day Parade on Fifth Avenue.
I've never forgotten the album, have since had it transferred to tape, then cd (it's also on my iPod), and on the rare occasion when spirits move me, I enact the story in its 30-minute entirety roughly around 3 o'clock in the morning for my more stalwart, patient friends.
My sophmore year of college, I quite grew up, matured, or what-have-you, and fell in love for the first time in London, but I never did see the changing of the guard at Buckingham Palace. I don't really linger upon that: my particular balloon and I have had our own impossible flights of fancy. Having had the great fortune to live in New York for almost 17 years, on St. Patrick's Day I still play "We're Paintin' the Town Green for the Irish" from the album, yet I've never been to the parade on Fifth Avenue. I just love marching back and forth across the apartment in time, while singing along to the song. Silly, I know, perhaps.
Last year, when Baby and I went to Italy, it really struck me though: when any of us are fortunate enough to travel, it is by the string of a magic balloon, isn't it?
I haven't sung to the Sphinx yet, nor have I sniffed Cherry Blossoms in Japan, but so suddenly it seems, we are flying off to Switzerland in a week, where I hope to find someone to teach me to yodel. We are also traveling down to the South of France, to Marseille to try the bouillabaisse; Cassis for sea urchin plucked out of the Mediterranean Sea; then, Lake Como for cocktail views at sunset and perhaps a George Clooney sighting; and Milan for who knows what other adventures we will find.
Please hold on to the string with me, would you?