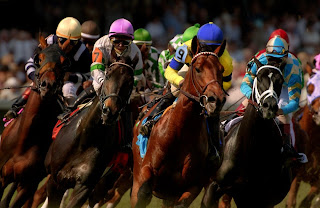 For the first time in the 15 years that I've been throwing Kentucky Derby parties, I actually had to make more simple syrup for the Mint Juleps! Probably because I made Trudy's Mint Juleps for the first time too, which our guests found irresistable. This Derby party was also special since Baby and I are going overseas for a few weeks and we wanted to be with some of our nearest and dearest before we take off. Hence, a Kentucky Derby Bon Voyage Party! 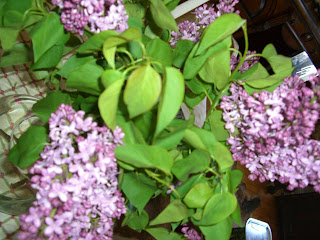 When folks arrive, Benedictine sandwiches are always on the table, the recipe pulled from an issue of my beloved Saveur magazine collection. To whit, cucumber and cream cheese sandwiches, with a touch of Tabasco, lightly spread on Pepperidge Farm Very Thin White Bread. We also juiced a parsley bunch and whisked it in for some color and flavor, instead of the curious use of green food coloring.

Martha Stewart's Menus for Entertaining has always been epic in my mind, instrumental in planning my Derby parties--stuck in between its pages, my sentimental copy has grocery receipts, shopping lists and pressed lilacs from years past. From the "Fried Green Tomatoes" Brunch, the simple to make Buttermilk Biscuits with Red Tomatoes are always a crowd pleaser. I don't actually make the biscuits, as Ms. Stewart suggests, I just buy Pillsbury Grands; I don't think biscuits get much better than that. We purchased Homestyle, Southern Style and Buttermilk for a decent variety, sliced the tomatoes somewhat thinly, with a widge of salt and pepper and served in a colander lined with a cunning cloth napkin.

We introduced a vat of the legendary Chasen's Chili to the Derby party, which I think is probably the best chili I've ever had! We ordered Gebhardt's chili powder online (for cheap!), but also threw in some of Penzey's Chili 9000 powder, which features cocoa powder in its list of ingredients. We served with grated cheddar cheese, sour cream, scallions and Frito's, like a Frito Pie. Mama yo quiero! How do you say delectable, divine?

Now to the race itself, the most exciting two minutes in sports, nobody at our party had bet on the winner, Mine That Bird, but since my pal and I had both bet on Pioneer of the Nile, who came in second, we split the pot. Another first! I had never won a dime ever at any Derby party!

Apres le competition, we served Ms. Stewart's Southern Shrimp with Grits, this time incorporating tender, flavorful rock shrimp as opposed to regular shrimp which is a pain in the neck to devein. We broke out and served it on individual spoons, with a dollop of grits, covered over by a fine dice of red, orange and yellow peppers with the shrimp and a topping of bacon and parsley. Just between us, anything presented on an individual spoon is sure to elicit innumerable 'oohs' and 'ahs.'

I think we all had a wonderful time and thankfully, the weather was with us once again for the Derby as we sipped our minty juleps with the breath of spring in the air, having pushed the windows wide open, even as we lingered into the evening. 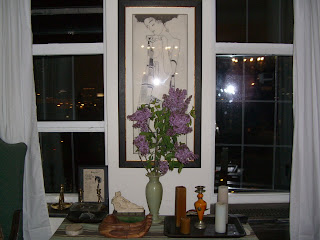