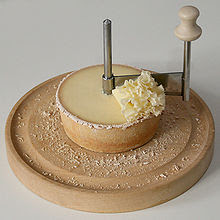 I first sampled the marvellously heady Tete de Moine when Reggie and I reviewed Ayza earlier this year for Next magazine. Executive chef Sean Chudoba gets all of his cheese from Murray's cheese shop here in the city and serves it alongside a host of cured meats and small plates. Translating to Monk's Head from the French, there's a lot of history behind this Swiss delight, spreading over hundreds of years. French Revolution soldiers used to scrape the cheese with a blade that would otherwise have shaved the heads of monks, thus the name (I also suppose the frilly suggestion of a monk's coiffure had something to do with it). Only about 30 years ago, someone invented the girolle, a cunning device to elegantly unfurl the cheese. Although available at Murray's, Baby and I waited and went right to the source to purchase our girolle once we'd arrived in Switzerland!

A note on the cheese: only a throroughly chilled Tete de Moine will slice with ease.

Posted by Peter Sherwood at 7:24 PM