The Green Balloon - Better Than Bouillabaisse 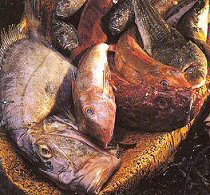 One of the things I was looking forward to in Marseilles was the bouillabaisse. Unfortunately, Miramar, one of the finest places that had been recommended to us, wasn't open when Baby and I went. Marseilles sort of shuts down on Sunday and Monday, sometimes Tuesday.
Pressing forward: we discovered Chez Loury on the Rue Fortia in the Vieux Port. It was cozy as all get out, seated as we were, in the back with only a few tables--even though one of them was filled with a drawling horde of somewhat unsettling Texans with a penchant for cell phones.
But we were there for the bouillabaisse, and we had it in spades. Now I can't say that I particularly liked it, although it wasn't the fault of the restaurant, just a matter of personal taste. I ordered the traditional version which came out in three exhaustive (and repetitive) courses. First out was the Soupe de Poisson (fish broth), which I very much enjoyed, with a fine taste summoned from a foreign shore enlivened by a classic rouille (saffron mayo) on a floating crouton. Then the broth resurfaced with the fish in it (Saint Pierre, rascasse, baudroie); afterwards, more fish (vive, galinette, fielas) without the broth. Baby ordered the more conservative version, a single dish of Bouillabaisse du Ravi.
I had always thought bouillabaisse was close to paella, indeed is served similarly in the States. True bouillabaisse (well, don't throw that phrase around a Frenchman) isn't outfitted with salmon or shrimp as I saw on a New York menu just the other day. It really just features cheap fish. Julia Child's recipe for Bouillabaisse a la Marseilles (Meditteranean Fish Chowder from The Twenty-third show) does encourage shellfish such as lobster or crab for color, but otherwise leans toward lean fish, "of the best and freshest-smelling quality" such as cod, grouper, perch, or haddock.
The real treat we had in marveilleux Marseilles was up the rue apiece from Chez Loury at Toinou where we settled down to a wondrous tray of les huitres! Divine oysters! 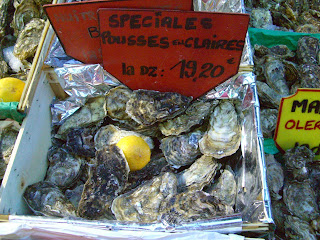 From the French coast resting on the Atlantic ocean between Nantes and Bordeaux, our pousses en claires were hefty beauties that were a perfect storm of everything an oyster should be, at once briny, creamy, and utterly delicious.
Consider the oyster, indeed, as we did! 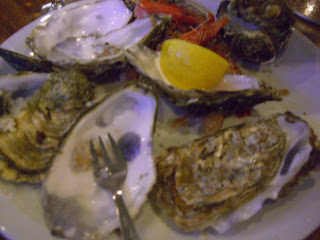 Posted by Peter Sherwood at 6:32 PM