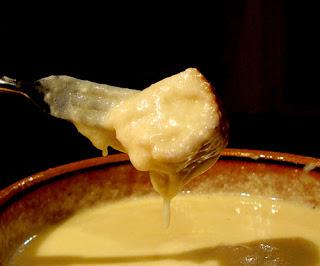 Sure springtime is a little past the season to have fondue, but then again, why the hell not? After all, we were in Switzerland and did imagine there was a faint chill in the air that needed remedying.

I was familiar with cheese fondue, having made it myself several times, a few of which landed with dubious results. Once when out on the town (there was a sort of fondue resurgence in Manhattan, years ago), I also tried the meat and fish kind, served with oil or broth. I'm not such a fan of that. Then of course, there is chocolate fondue, where just about anything that can be speared on the end of a fondue fork or other such similar conveyance is allowable, and usually encouraged.

This recipe for cheese fondue is a somewhat subtler bacchanal, suitable for six, where kirsch (cherry brandy) is not only an ingredient, and a digestive accompaniment but a neccessity as well, for dipping crusty cubes of country bread into first before plunging headlong unto the bubbling fray. Although not included here, a few grinds of white pepper and grated nutmeg would surely well assist.

-Rub inside of pot with garlic, discard.

-Add wine to pot, bring to simmer over medium heat

-Stir Kirsch and cornstarch together and SET ASIDE

-Gradually add cheese and cook, stirring constantly in a zig-zag pattern until cheese is melted and creamy

-DO NOT BOIL, stir in cornstarch and Kirsch mixture

-Simmer and cook until thick

Posted by Peter Sherwood at 8:38 PM