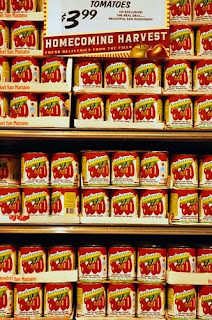 Reggie and I ducked out of our respective offices to have a little lunch one afternoon not too long ago. As an illicit getaway in an afternoon may take you through any number of discussions, I happened to mention a recipe for Oven-Roasted Tomato Sauce that I like from Cuisine at Home magazine. Her eyes grew wide. She grew up in South Philly as part of an Italian family, but the roasting of the tomatoes for sauce was news to her. Even though the recipe is a sauce for pizza on the grill, I like it over meatballs or even pasta. It is delicious indeed. Our conversation swiftly turned to red sauce and she led me through the different types of tomatoes to use depending on what kind of sauce you're making stove top, on the boil, as it were, as she had learned growing up. I thought I should pass the information along.

Marinara Sauce
Use canned or whole plum tomatoes (blanch them in boiling water and slip them out of their skins when cool enough to handle) with simply some garlic, good olive oil, and basil at the end, seasoning to taste with salt and pepper. Reggie loves to squeeze the tomatoes with her hands, right in the pot, instead of breaking them down with a wooden spoon as they simmer over time.
Gravy or Meat Sauce
Use strained tomatoes (Reggie recommends Pomi, out of a box) and tomato paste. Add garlic, olive oil and basil with onions, red wine and a mixture of ground veal, beef and pork or chicken.
Pizza Sauce
Use canned crushed tomatoes with olive oil, oregano, salt and pepper. Reggie suggests a good, local Philly tip: put your cheese on the pizza dough first and add the sauce on top before baking.
Jar Sauce
Use fresh New Jersey Plum Tomatoes while you may, in July and August.
Crabs & Spaghetti
Use canned or Pomi strained tomatoes for this classic and simmer your crabs in garlic, tomato paste, olive oil and basil.
This is such an unusual dish that sounded just too delicious and was totally unfamiliar to me, so I had to include the recipe here, in Reggie's own words:
"Use Maryland blue hard shell crabs. Heat olive oil and garlic in a big pot. Add two large cans of your favorite brand of strained tomatoes. Add a small can of tomato paste and fresh basil. Throw in cleaned whole crabs--this means removing the backs, which is best to have done at the fishmarket for a service fee. If you can't have them cleaned, then put them in the sink in warm to hot water for 15 minutes and they are ready to clean without crawling over your sink and counter top! Keep the crabs in the sauce for 10 minutes. Take most of them out and leave three in the pot to flavor the sauce. Simmer low for at least an hour and a half or longer. A few minutes before the sauce is ready remove and discard the three crabs (they are too mushy at this point to eat). Add the rest of the crabs back into the pot to warm them for a few minutes. Be sure not to overcook the crabs. Add to cooked spaghetti. It's all really messy but absolutely worth it and leftover cold crabs are fantastic the next day."
So then, mangia!
Posted by Peter Sherwood at 5:51 PM