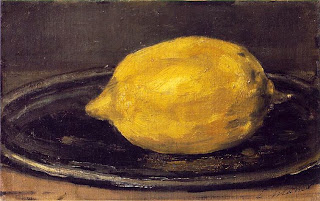 I have to admit my first stab at Sole Meuniere was a real lemon, at least to me, and it shouldn't have been: the recipe is not terribly difficult. Honestly, it appeared I was the only one who didn't like it so much. Our guests raved and ate it all; I just knew it wasn't that classic, single dish that stirred Julia Child's soul and launched her interest and subsequent career in mastering the art of French cooking when she first tasted it, in 50's France. Now, I wasn't trying for such transcendence here, I was just trying for something good, unique, and if nothing else, at least properly prepared!

At the most basic level, sole is absolutely delicious, probably whatever you do to it. So that's where I was lucky. My mistake was stupid and stemmed from haste and perhaps even nervousness to prepare a meal that Baby's co-workers (some of whom I had never met) would really enjoy. We had about ten filets and I dipped them in egg, then dredged them in flour. I then stacked them and went about other business when they just should have gone in the buttery frying pan, one at a time, as I dipped and dredged. Instead they just sat there on the plate for only a little while but that's all it took for the flour to become gummy. As I tossed them into the pan, I frantically sprinkled more flour, flipped and carried on with the rest. I guess that saved it in a way, and now I know what to do next time, but I was still (inwardly) disappointed. The sole is finished in a simple lemon and parsley sauce.

Moving on. We wanted to have shrimp for our appetizer, but as good as shrimp cocktail is, it almost seems cliched and a little lax with hardly any effort behind it. I thought of using something other than cocktail sauce but then turned to the idea of gazpacho in cappucino cups served with poached shrimp. Better, but somehow it didn't seem right to start off with. Then I thought of a cold pea soup recipe with mint that I used to make. Better still and more in keeping with the rest of the menu I had planned! I first grilled the shrimp, poached them in pork stock, chilled everything and served our Minty Pea Cappucinos with the shrimp on bamboo skewers tucked inside.

So, for the main dishes (and yes, I'm afraid there's still more to report about the Sole Meuniere) I thought to combine cultural influences (sorry, I sort of ache at the word fusion) and top the fish with sauteed leeks and squash blossoms inspired by the Sole with Zucchini Blossoms recipe I read about in La Cucina Italiana magazine. The leeks were a nice addition surely, but the frozen and stuffed breaded blossoms I had purchased in error turned to a mushy mess when I attempted to sautee them and more so, when in a panic, fried them afterward. They should have just been baked I think. Really I should have bought fresh, as in the recipe from La Cucina Italiana. Thankfully, nobody saw them at all or the act of my throwing them out! Anyway, at least they were inexpensive. The big slab of Filet Mignon came out perfectly medium-rare, in a delicious red wine reduction. I also made a summer favorite, from Saveur magazine that I've been making for about a hundred years now--Trenette col Pesto Genovese, Linguine with Pesto, with potatoes and string beans. It's such a good dish, single-handedly takes care of starch and vegetable sides, and goes very well with either meat or fish, or in this case, both.

La Tur cheese carries the moniker of being the "ice cream of cheeses" and after one luscious, extraordinary bite, I'm sure you'll agree. Seemed like a good idea for dessert. We also got the old girolle out (I wrote a post about it back in May) and spun frilly slices of Tetes de Moine (translating to monk's head) cheese. We put some blanched almonds and dried apricots out and filled an egg cup with quince paste to round out our cheese plate.

Oh and P.S. if a dish really doesn't come out well, then just start plying your guests with a lot of wine. Or order pizza. At least you tried.