In The Kitchen With Stan Matusevich 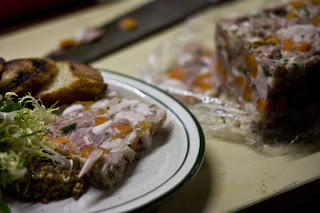 Baby and I sat down to a particularly unusual dining experience recently. He and a handful of his former co-workers get together every few months and although I've never worked with any of them formally, they graciously let me tag along as part of the gang. Now, the title of this post is not a jovial "someone's in the kitchen with Dinah" type deal, we actually were in the kitchen with Executive Chef Stan Matusevich at Cafe Select, seated at his table set for eight of us, amidst the music from the kitchen radio, the fervor of the staff, bustling about the food intended for us as well as the rest of the patrons in the restaurant proper beyond the swinging doors, while we were seated rather exclusively in the back, between the prep fridge and the freezer.

The menu was for seven courses, which we all shared, and in omakase fashion, we were served the best the chef had to offer from the collection of the day's freshest ingredients. Here, such personal treatment is an affordable joy at a set price, though we may have considered our booze intake, as more than a few martinis were knocked back along with oceans of white wine that added considerably to the bill!
Verdant, minted spring pea soup with an orange and carrot reduction was first brought out as an amuse bouche, a delicious little sip to "arouse the mouth." The buckwheat crepes with smoked salmon that followed were a gorgeous nibble, dressed with quark (a yogurt-sour cream blend), cucumber and arugula. An interesting yellow and green bean salad was quite good, with crisped proscuitto and pumpkin seeds, in a roasted garlic vinaigrette which lent a peppery bite.
I can hardly say we took a little rest here before plunging into entrees when we were served housemade head cheese, which we all thought was fabulous, but I also allow that various parts of a pig's noggin simmered for five hours, brined overnight and pressed together in the fashion of terrine, served cold, is not for everybody.
We all agreed however that the risotto with creamy leeks, roasted king oyster mushrooms (with a tangy touch courtesy of Worcestershire and sherry vinegar), lemon zest and shredded parsley was heavenly. The saddle of lamb in a wine reduction with roasted potatoes was very good and so was the wonderful, clever picatta of monkfish with preserved lemons, oven-roasted tomatoes, with green figs and vibrant capers.
A Swiss version of brulee with burnt cream in caramel and meringues was a delight but a vanilla custard with cherry glaze took the cake. Outrageous, ridiculously good--served with cherry and almond cookies.
What a wonderful, entirely new meaning to eating in!
Posted by Peter Sherwood at 5:27 PM