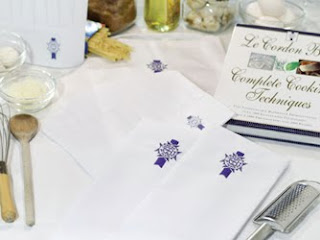 The first meal I ever made with my friends was very simple, not long after I had graduated high school.

Though our entree may never have been instructed or served at the famed Le Cordon Bleu cooking schools, we did happen to serve Chicken Cordon Bleu which ending up serving as a memory I still cherish to this day.

It was only the four of us that clandestine summer afternoon at my parents' house, while they were out of town for the weekend. I suppose we went shopping and bought the ingredients, found a proper stash of wine, some beer or maybe even liters of Sun Country wine coolers as we were wont to do, back then.

When we got home, I remember putting a stack of some of my Billie Holiday records on the turntable in the dining room and it became the indelible score for that afternoon: her dreamy and sad music still reminds me of it now, floating around as it did then, united as we were, in the kitchen.

While EES supervised I'm sure, JC prepared the Cordon Bleu, pounding and breading the chicken cutlets which were to envelop the ham (such as Black Forest) and Swiss cheese to make it all juicy and gooey when baked in a moderately temperatured oven.

Perhaps more humbly on our part, TD and I stirred the contents of a few tins of Pepperidge Farm Selects creamy vichyssoise together with some cold milk in a bowl and let it chill for the better part of an hour in the fridge, adding what I thought was an inspired touch of my own: a little dried thyme. Loved it.

I don't know if we had salad first, nor do I remember if we had dessert afterward. We could have had a flaming Bananas Foster for all I know. The fact that we created a wonderful afternoon making a meal together is what I'll always remember.

What is still true, I like my vichyssoise topped with thyme or with finely minced chives--but I do make my own now, not out of a can, as good as that was. JC still delights in making a fine Cordon Bleu too. But I think we have all relegated Sun Country wine coolers as a thing of the past.

JC's Cordon Bleu
"Medium sliced ham, as fancy as you want. I sauté the slices for a minute or so in butter w/ black pepper and some basil.
Pound out chicken breasts until they are flat and maybe 3/4 inches thick. Soak the breasts for a half hour in a white wine that is not shy.
Dip them in a single egg-milk mixture. Coat w/ breadcrumbs to which you add spices you like and a little grated Romano.
Preheat to 375ish. For a few minutes put your ceramic baking dish in the oven with a little bit of olive oil spread about.
W/ the flattened breasts on a cutting board, top w/ your ham, plenty of Swiss, (again as strong as you want), so that when you roll the breast and fold the edges the breasts are stuffed but the ham and Swiss are enclosed. Use toothpicks to clamp them shut. I usually sprinkle more bread crumbs over the top and pour some of the remaining white wine over them all.
Take the hot dish out of the oven, and carefully place the breasts within. The little bit of olive oil should be hot enough so that the breasts sizzle when they are placed on the surface.
Do not overcook! Maybe 35 minutes at 375. W/ ten minutes left use a spoon to baste."

Soundtrack: The laughter and clinking glasses of friendship