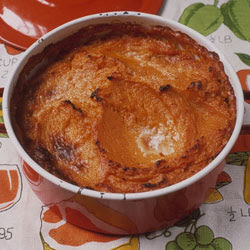 When I was going to school in London (22 years ago!) my friends and I hopped a ferry and went to Paris for Thanksgiving. Given my New England upbringing, I somehow had no problem foregoing turkey and stuffing for a rare filet mignon with grilled potatoes and a few glasses of cheap red table wine. This year I'll be in London again where I plan to spend Thanksgiving at my favorite restaurant in the world (at least what I know of it), Rules, that specializes in game cookery.

I've only made Thanksgiving dinner once, and actually my friend brought over the turkey. I had planned to make a bunch of side dishes, so many in fact that I forgot about some of them, the peas and pearl onions left uncomposed in the fridge--and I discovered the stuffing still in the microwave about a week later.

Here's one of the dishes that I did manage to make. I learned about Clementine Paddleford, the pioneer of American food writing, in the pages of Saveur magazine that year and chose to make her Sweet Potato Tipsy. Although she is largely forgotten today, I like to keep her memory alive by pulling out this wonderful dish every now and then.

Sweet Potato Tipsy
Serves 6-8
8 medium sweet potatoes
2 pinches of salt
7 tbsp. butter
1⁄2 cup half and half
1⁄4 cup dry sherry
3 tbsp. brown sugar
1. Preheat oven to 350°. Put 8 medium sweet potatoes into a large pot, cover with cold water, and add 2 generous pinches of salt. Bring to a boil over high heat, reduce heat to medium, and cook until soft when pierce, 30-40 minutes. Drain and set aside to cool.
2. Peel potatoes and transfer to a large bowl. Coarsely mash potatoes with the tines of a fork, then add 5 tbsp. softened butter, 1⁄2 cup half-and-half, 1⁄4 cup dry sherry, and 3 tbsp. brown sugar. Beat with an electric mixer on medium speed until light and fluffy, about 2 minutes.
3. Transfer sweet potato mixture to a buttered medium baking dish, dot with 2 tbsp. butter, and bake until top is golden brown, about 30 minutes.
First published in Saveur in Issue #62; photo by James Baigrie
Posted by Peter Sherwood at 10:06 AM