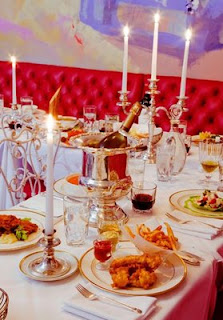 Sweetiepie is above all else, a lot of fun. I enjoyed it most when I went the first time, perhaps because I was with my niece and nephew and saw it through the eyes of a child. It’s perfectly pink and modeled after an old-fashioned malt shoppe and on a more recent visit, it was a great place to catch up with a dear friend, sitting as we did in a huge golden birdcage in the front window. Details such as antique silverware and plates amp up the utter charm.

Naturally we had to try The Sweetiepie Cocktail ($11), a yummy, fizzy concoction of Champagne, St. Germain and pomegranate. A Pomegranate Margarita ($11) might have used a tad more tequila and a little less pomegranate puree.

The crisp Florian Mollet Sancerre ($10/glass, $38/bottle) that accompanied our meal could have been chillier, but was still quite drinkable. Our Iceberg Wedge ($11) was a wonderful, heaping mound with a smattering of apple smoked bacon shards, dressed in a rich and earthy Roquefort cheese, which we in error thought may have been laced with truffles. We found truffles instead in the Wild Asparagus Risotto ($18), which was very good, accented by a wafer-thin parmesan tuile. Spaghetti and Meatballs ($18) featured thick noodles and had homemade sauce just like Grandma used to make.

We ordered the marvelously gooey Macaroni and Cheese ($15) with toasted breadcrumbs to go along with our 3 Mini Burgers ($14), which were only okay this trip: the bun was stiff and I bristle at and discard pale tomatoes; the meat was fairly decent but we liked the special sauce. Our waiter suggested we try the Roast Chicken ($24). Although the skin was overly salty, the really good half Cornish hen was tender, served on a scrumptious bed of caramelized leeks with butter, thyme and garlic.

The Dessert Sampler Platter ($12) was heaven. A light little tower of wedding cake with lemon sauce threatened to float away; the dollop of blueberry fool was like whipped butter; the Tahitian vanilla mini ice cream cone with chocolate sprinkles was completely adorable.