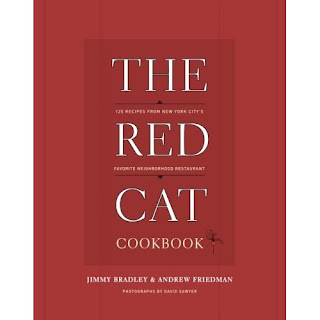 I don't mind telling you right up front: I didn't make my own cavatelli. As much as Jimmy Bradley persists in making pasta at home for Cavatelli with Braised Veal Cheeks in The Red Cat Cookbook, from his restaurant (and our neighborhood fave) The Red Cat, once I read about rolling out obstreperous 30-inch logs of dough which are to be cut into 1/4-inch pieces and further pinched, twisted into shapes and flung into a bowl, I immediately turned a pale shade of puce and hied myself to Buon Italia at the Chelsea Market, where the pasta may be bought fresh, without the fuss.

Also, I didn't use veal cheeks. I learned veal cheeks are a special order item from the butcher requiring advance notice, and as our dinner was to be a simple, somewhat impromptu affair, we used an entirely suitable shoulder of veal instead. Absolutely salt and pepper the meat and braise it the day before as Bradley's cookbook suggests, in a rich sauce of beef stock, hand-crushed, whole-peeled tomatoes, and a hearty red wine with diced onions, celery and carrots--garlic, diced plum tomatoes (I used heirloom grape tomatoes), grated Pecorino Romano cheese, basil and full leaves of escarole finish the dish the next day, resulting in pure genius. I'd even venture to suggest really planning ahead by alotting enough time that once finished, let your pasta sit overnight and then reheat the whole thing to serve to your guests yet another day later.
A modest salad of red leaf lettuce with shallot-Champagne vinaigrette accompanied our delicious dish, and we were beside ourselves just dipping homemade bread into the sauce. I meant to get single serving Ciao Bella sorbets for dessert, but I forgot. Didn't matter anyway--we hardly needed it!
Cavatelli with Braised Veal Cheeks
Adapted from The Red Cat Cookbook by Jimmy Bradley & Andrew Friedman
Serves 6 as an appetizer, or 4 as a main course (but unless your guests are cattle, I think this makes much more than that!)
Ingredients
1 cup plus 2 tablespoons canola oil
1 pound veal cheeks (or veal shoulder)
Salt
Pepper
1 carrot, onion, celery each coarsely chopped
1 35-oz. can whole peeled tomatoes, crushed by hand, with their juice
2 cups veal stock (we used homemade beef stock)
1 cup red wine, preferably Barolo or Cabernet (a sturdy red table wine will do just fine and be considerably cheaper)
5 thyme sprigs
2 large cloves garlic, coarsely chopped
1/2 medium head escarole
1 pound store-bought fresh cavatelli
3 plum tomatoes, seeded and diced
1 cup grated Pecorino cheese
2 tablespoons sliced basil
Preheat the oven to 325 degrees.
Pour 1 cup of the canola oil into a heavy-bottomed roasting pan and heat over high heat. Meanwhile, season the veal cheeks with salt and pepper. Add them to the pan and brown well on both sides, approximately 5 minutes per side. Remove the cheeks from the pan and set them on a plate. Pour off all but 2 tablespoons of fat from the pan. Add the carrot, onion, and celery and brown them, approximately 5 minutes. Add the canned tomatoes, stock, wine, and thyme and bring to a simmer. Return the meat to the pan and transfer to the oven. Cover and braise until the meat is almost falling apart, approximately 2 1/2 hours. As the cheeks braise, periodically check on them to be sure the liquid isn't boiling aggressively; it should be at the mildest of simmers (0ver the braising time, I ended up gradually turning my oven down to 200 degrees).
Transfer the meat to a plate and set aside. Pass the braising liquid through a food mill to make a sauce. When cool enough to handle, shred the meat by hand and return it to the sauce.
Bring a large pot of salted water to a boil over high heat.
Heat two tablespoons of canola oil (I used olive oil here) in a wide, deep-sided, heavy-bottomed saute pan set over medium-high heat. Add the garlic and cook until it's just beginning to brown, approximately 2 minutes. Add the escarole and saute for a minute or two, then add the meat and sauce and cook for 2 to 3 minutes to warm the meat and integrate the flavors.
Add the cavatelli to the boiling water and cook for about 3 to 4 minutes. Strain and add to sauce. Toss in the fresh tomatoes, Pecorino, and basil, and adjust seasoning with salt and pepper.
(The recipe suggests drizzling olive oil over the pasta and adding some more grated cheese when serving, but why gild the lily?)
Posted by Peter Sherwood at 1:00 AM