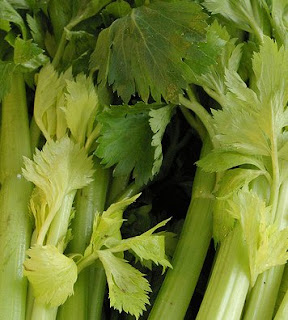 Although scrambled eggs was the first dish that I was taught and made successfully when just a little nipper, there was another dish before it that I made quite unsuccessfully, quite on my own. I used to watch a strange little cartoon called The Oddball Couple (based on Neil Simon's The Odd Couple) featuring a dandy cat named Spiffy and a slobbering dog named Fleabag. I remember thinking it was an absolute riot. So moved was I by one episode where Spiffy (the Felix Unger character) cooked something or other, I hightailed it to the kitchen to make something of my own: sauteed celery doused with Worcestershire sauce and served on wheat toast. It was truly gruesome. I couldn't even eat it.

Well, it turns out that not only hope, but celery too springs eternal. When I made Hoppin' John stew on New Year's Day, it required a stalk of celery, as so many soups and stews do, and like so often before, I found myself wondering what to do with the rest of the package. Single carrots are easy enough to find but not celery. And as much as I sometimes think I might like a snack of celery, I find Ants on a Log to be exhausting and just end up throwing the balance of the bunch out.

I turned to epicurious.com to look up something to do with my celery. Thoughts turned to celery soup, but I didn't have all the ingredients and didn't want to go out again. Suddenly, there it was--Celery Victor! Wary at first, this ended up being a light, elegant and extraordinary dish that felt French, even though its origins are to be found in San Francisco's Hotel St. Francis at the hands of chef Victor Hirtzler. One bunch is an ample amount for two people, presented at lunch, so pretty on a serving platter with celery leaves as a garnish alongside a few glasses of pinot grigio.

The dressing is wonderful--try it on asparagus too--but don't substitute vegetable oil instead of Canola oil as I did the first time out (horrible!): just cut to the chase and use extra virgin olive oil. Also, Celery Victor may be served with anchovies, but I just added about 1 teaspoon or so of anchovy paste into the dressing. Victorious!