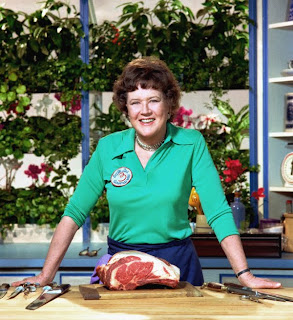 In a year where the incandescent Meryl Streep so buoyantly captured the essence of Julia Child on the big screen in Julie & Julia, I thought a tribute to the great lady herself, an inspiration to so many of us, would be fitting to close out the first year of my food blog. I actually had a heart-stopping moment in the spring of 2008 when I saw Ms. Streep out of the window of my old apartment, walking down the street in full 1950's Julia regalia on a break while filming the movie. Now, with all due respect to Julie Powell, author of The Julie/Julia Project and her admirable accomplishments, I believe the love of cooking is neither a race, as she sped toward her personal finish line, nor a competition, as reality television would have us see it today. Some years after Julia's passing, Julia stands tall (very tall), and it seems her extraordinary legacy has never been more apparent than with a new generation of fawning fellow food bloggers or more precious with the advent of the contemporary celebrity chef.

When I saw the biting headline that rumored Rachael Ray’s marriage was “E.V.O.Over,” I thought finally people were tired of her and her ridiculous kitchen speak, including the exclamations of “yumm-o!” that pepper her shows. I know I certainly was. She reminds me of Violet Beauregarde, that little brat in Willy Wonka & the Chocolate Factory who couldn’t stop chewing gum. Ultimately it’s Ray’s gimmicks that are remembered and not a single thing about the food. Isn’t it food that these shows should be all about? Perhaps not, in the age of the celebrity chef. Paula Deen is armed with her sticks of butter—and let's not tarry over Sandra Lee’s Semi-Homemade and her tablescapes! She’d have more time to make real food if she was less concerned about matching her outfit with the serving ware. What about those of us that like to linger in the kitchen and cook? With the stars’ faces plastered on every baking pan, kitchen utensil, cookbook and endorsement, their food is merely a fashion. By the way, did you see that Dunkin’ Donuts commercial with Rachael Ray? Neither did she. The Arabic desert headdress she wore as a scarf was deemed terroristic in tone and the ad was pulled.

Perhaps the celebrity chef is an inspiration to the future chefs of America. Perhaps becoming a celebrity chef is even now a goal. Certainly the culinary field is growing rapidly, if only evidenced by these minute-meal-making media moguls. But unless you’re seated at a good table in a terribly chic restaurant, the restaurant industry is hardly glamorous and these cooking shows offer one instance where “art” does not imitate life. Kicking a dish up a notch with a flurry of garlic and a “bam!” as Emeril does (his last name seems to have disappeared, like Cher) is hardly a realistic depiction of the real business. He knows better too, having numerous restaurants of his own. If, for example, you ever saw one of the first kitchen reality t.v. shows, The Restaurant, about Rocco DiSpirito’s short-lived restaurant Rocco’s, it’s clear just how hot the kitchens really get: it’s grueling, often repetitive work, with incredibly long hours both day and night. Weekend time is non-existent.

No, it’s Julia Child I miss, the brilliant, rarefied bird, otherwise known as The French Chef who on occasional flights of fancy would leave her kitchen and take us to outdoor markets in Nice to sift through buckets of olives and capers for a Salad Nicoise. She was a real pioneer, the original celebrity chef; the first to have a cooking show on television, one that began solely about an extraordinary culinary method that fascinated her and through her own sheer exuberance became a triumphant rigor by which we all should live. Julia Child marveled at food and changed the way the world thought of it—all without uttering a single “yumm-o.”

First printed in part on cookingvillage.com.
Posted by Peter Sherwood at 7:57 AM