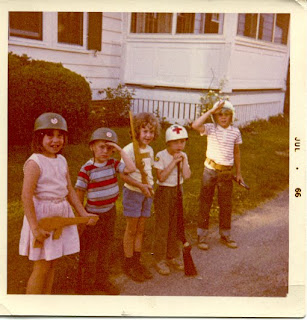 The Loughlins are a hilarious, wild bunch and each of them in their own way are made of the stuff that feeds my heart and soul, and they've created a lot of fun memories for me over the years as they so fortunately happen to be my cousins. I don't get to see them all that often though, usually just at Christmas time and Easter in New Hampshire. This year when my parents, Baby and I got together for Christmas with them and all of their magnificent children in tow, we played a hilarious game of Yankee Swap. We had all bought presents, and in the living room after dinner each of us drew a number and picked something to unwrap. If we didn't like what we got, we could trade with someone else.

I'd always heard stories of how the Loughlin clan were terrorized by the food their mother used to serve when they were kids: peaches with mayonnaise, Spam, brutalized hot dogs and such. I don't know which wiseacre put it all in a box but there it was, as sure as Christmas, evocative ingredients from their childhood, opened by an unsuspecting member of the family: hot dogs, beans, a red onion, vanilla wafers, tomato soup, tuna, and Saltines. The components might sound harmless enough on their own, but combined they create some truly hair-raising dishes! As the recipes and a 10" Emeril frying pan were also part of the deal, Baby and I worked in tandem to make sure when it was our turn we traded whatever we had in order to secure this particular Christmas box. Mwah, you guys!
Here are the recipes:
Blushing Bunny
1 can of tomato soup
Melted dried up cheese from the Green Visors card game (apparently a weekly club meeting Mother Loughlin belonged to)
Heat on stove and pour over Saltines
Spam & Beans
Just Spam on a plate, sliced. Lovely when accompanied by B&M beans
Stuffed Puppee Dogs
Split filler meat hot dogs
Stuff with mashed potatoes
Pour tomato soup over top
Cover with Velveeta cheese
Bake for 1/2 hour at 350 degrees
Tuna Patties
Mix 1 can of tuna
Sunday's leftover mashed potatoes
Large chunks of red onion
Prepare in hamburger-shaped ball
Fry in butter until brown and dry on either side
For dessert either Vanilla Wafers or Canned Peaches may be served. For the latter, drop a large dollop of mayonnaise on top for garnish.
Posted by Peter Sherwood at 12:14 PM