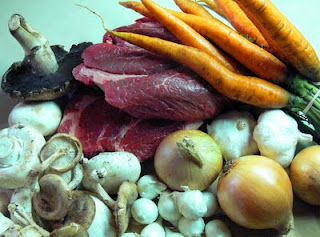 When it came to making a Boeuf Bourguinon for our guests, I wasn't sure whether to make the reliable version from Saveur (they refer to it as Boeuf a la Bourguinonne, beef stew in the style of Burgundy) that I had made several times or to try something new, such as Julia Child's more elaborate, perhaps more elegant version of Boeuf Bourguinon - Beef in Red Wine from The French Chef Cookbook (The Ninety-sixth Show). The latter eventually won out and after several requests for seconds I inevitably had to inquire, "Where's the boeuf?"

So what else to serve beforehand and afterward? Flipping through the January 2010 issue of Bon Appetit provided an easy answer for cocktail hour snacks: I thought Parmesan Toasts with Prosciutto and Fig Jam would be a good idea to get the ball rolling. Click here for the recipe. I don't subscribe to Bon Appetit but after Gourmet magazine closed its kitchen doors, so to speak, they've started sending me issues of Bon Appetit as a consolation prize to finish out my yearly commitment. I can't really go into it but I was just beside myself when the last issue of Gourmet arrived (I kept it sealed in the subscription plastic and bought another copy on the stands and sent a stawker-ish message to Ruth Reichl on Twitter with my condolences and told her of my stack of vintage issues from the 70's). In short, the toasts worked just fine over glasses of a Caymus Vineyards Cabernet and a Cantina Zaccagnini Montepulciano d'Abruzzo, both red wines courtesy of our wonderful friends.
We contemplated classic escargots but no, it was the Zwiebelwahe (Swiss Onion Tart) from this month's Saveur that provided this meal's panic moment. Instead of making my own pie crust, I formed puff pastry into a buttered enamel tart tartine pan. It browned nicely in the oven, but I realized I couldn't fill it with the egg, Gruyere cheese, onions and crispy bacon mixture and put it back in for the required 45 minutes baking time to let it all set because of course my crust would burn. After a breath and in a moment of clarity, I gently loosened the crust out of the pan, set it aside and poured the filling into the pan. The results were quiche-like, about an inch thin. When it cooled, I placed my crust on top of my tart, like an inverted crown. Et voila, Tart Tartine in a Cage!
So, back to the boeuf! It was fairly simple, although very time consuming--it takes hours to simmer, but it is immensely satisfying work. I made the Bourguinon the night before and was glad of it (not only is the flavor enriched by sitting overnight, subsequently I had a much more relaxing day preparing the rest of the table!). The stalwart stew consists of three basic parts: 1. simmering browned beef in red wine with sauteed lardons of unsalted pork belly (use this instead of bacon or salt pork to avoid the arduous step of having to boil those to remove the smokiness or salt) before 2. creating a garniture of mushrooms and onions and then 3. enveloping it all in a delicious sauce of the beef-cooking liquid, onion-cooking liquid and creamed butter--as always, use the best creamy European butter you can find (we used Pulgra "European-Style" butter). We brought out skinned, boiled potatoes that I just loved, lightly sauteed in butter and garnished with flat leaf parsley. To soak up the sauce, Baby made an incredible loaf of spongy, yeasty goodness from Jim Lahey's new book, My Bread.
The French Chef Cookbook also assisted with a salad of Boston lettuce dressed with a Sauce Vinaigrette (The Seventeenth Show) comprised of white wine vinegar, dry mustard, some cooked onions left over from the tart, a sprinkling of herbs de Provence, and of course extra virgin olive oil.
Our friends helped out with dessert by bringing some fantastic almond paste cookies topped with pignoli nuts and enormous cannolis from their favorite bakery in Long Island. More humbly, we also served my favorite Brussels cookies from Pepperidge Farm, wedged into scoops of Sharon's lemon sorbet.
And so mes cheres, however you might call it, what a wonderful dinner of Boeuf Bourguinon or Boeuf a la Borguinonne on such a winter's night!
Soundtrack: The Greatest Hits of Sergio Mendes And Brasil '66; Barbra Streisand, Love Is The Answer; Frank Sinatra, The Capitol Collector's Series; Bobby Darin, Swingin' The Standards; Lambert, Hendricks & Ross, Everybody's Boppin'
Posted by Peter Sherwood at 12:58 PM