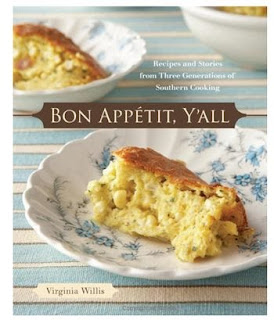 Last year, I discovered Virginia Willis' cookbook Bon Appétit, Y’all and was quite taken by the inventive set of dishes she assembled for a holiday menu based on The Twelve Days of Christmas, combining traditions of her Southern upbringing and methods she learned while training in France. The complete menu is listed below with several of the recipes, accompanied by Virginia's charming comments. I hope they provide inspiration for you in the kitchen this season. For more recipes, well...look to the book y'all!
"On the first day of Christmas, Virginia cooked for me…" 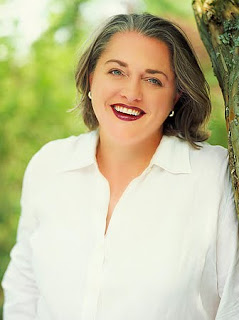 Preheat the oven to 400 degrees. Brush a baking sheet with some of the melted butter.
To roast the pears, arrange pear halves, cut sides down, on the buttered sheet. Brush the tops with remaining melted butter. Season with salt and pepper. Roast until just tender to the point of a knife, 20 to 25 minutes.
To dress the greens, place the arugula in a large bowl. Drizzle with the vinegar and olive oil. Season with salt and pepper and toss to combine and coat.
To serve, divide the greens among 4 to 6 individual serving plates. Top each with a warm roasted pear half, cut side up. Place a spoonful of goat cheese on each pear. Drizzle with honey. Season with salt and freshly ground black pepper. Serve immediately.

Three French hens - Mama’s Orange Glazed Cornish Game Hens
"Cornish game hens (or Rock Cornish hens) are not as large as a chicken, yet larger than a quail. The French call them poussins, and they are essentially baby chickens. Mama has always cooked game hens for semi-special occasions since we all love them. They are great for a dinner party, too. Plan ahead, however; many grocery stores only sell them frozen."

Preheat the oven to 450 degrees. Combine the herbs, shallots, orange zest, and butter in a small bowl. Season with salt and pepper and stir to combine. Loosen the skins of the hens without tearing by running your fingers between the skin and the flesh of the breast. Place a little of the herb butter under the skin of each bird and spread evenly. Season the hens with salt and pepper, then rub the skin with the remaining herb butter. Place the hens, skin side up, in a large roasting pan.
Roast until the birds are golden brown and the juices run clear, about 30 minutes. Transfer the hens to a large warm platter and tent loosely with the aluminum foil to keep them warm.
Place the roasting pan on the cooktop over medium heat. Add the sherry to deglaze the pan and loosen the brown bits on the bottom. Add the chicken stock and orange juice. Bring to a boil, scraping up the browned bits. Cook until reduced and slightly thickened, about 2 minutes. Taste and adjust for seasoning with salt and pepper. Spoon the sauce over the hens to serve.

Note:
To spatchcock a Cornish game hen or other small bird, place the bird on a clean cutting board, breast side down. Using poultry shears, make a lengthwise cut on both sides of the backbone from neck to tail. Remove the backbone and save it for stock. Open the bird like a book. Proceed with recipe. For an especially flat bird, place the bird on a baking sheet, top it with a second baking sheet, and weigh it down in the refrigerator with a brick or several large cans of tomatoes for several hours or overnight.
Four calling birds - Meme’s Roast Turkey and Giblet Gravy
"No holiday would be complete without Roast Turkey and Gravy. Certain side dishes simply can't change — you can always add more, but the general opinion is that none can be taken away!"

Seven swans a-swimming - Savannah River Catfish Stew
"One of my first memories is of falling into the pond behind our family home when I was about three years old. I remember the terror I felt in the brown murky water and the agitation of the adults who pulled me out. My grandmother’s main concern was not the possibility of me drowning, but that snakes might be at the water’s edge. The most common admonition heard from her throughout my young life was, ‘Don’t go in the bushes, you might get on a snake!’ "

Eight maids a-milking - Mixed Buttermilk Mash
"My mother tells of raising chickens and cows even when she was a child, but milking the cows stopped when one surly beast kicked my grandmother. They filled the freezer with beef instead!"

In a large, heavy-bottomed saucepan, place the potatoes and cover with cold water. Season with salt and pepper and bring to a boil over high heat; add the cauliflower, garlic, and carrot. Decrease the heat to low. Simmer gently until the vegetables are fork tender, about 25 minutes.
Meanwhile, heat the buttermilk and butter in a small saucepan over low heat. Cook until the butter is melted; cover and keep warm.
Drain the vegetables in a colander, and return them to the saucepan over medium heat. Cook, stirring constantly, until a floury film forms on the bottom of the pan, 1 to 2 minutes. Remove from the heat.
Mash the vegetables in the saucepan until smooth with a ricer, food mill, or potato masher. Add the warm buttermilk mixture and the parsley, stirring vigorously until well combined. Taste and adjust for seasoning with salt and pepper. Serve immediately.

Nine ladies dancing - Meme’s Pound Cake
"Our fellowship starts days before as we share the shopping and chopping. The baking commences early in the week, and the cakes and pies are held captive in various collections of Tupperware. The buttery smells of the cakes coming out of their pans is intoxicating. Whoever is hosting the dinner calls everyone and assigns a dish, often something on the sweet side. Our family holidays would not be complete without Meme’s pound cake. The best part is the crispy, dark-brown sugary edges. Much to my mother’s consternation, more than once, little pesky elves raided the opaque Tupperware cake container and nibbled away those tasty bits."
Makes one 10-inch cake
1 cup (2 sticks) unsalted butter, at room temperature, plus more for the pan
3 cups White Lily flour or other Southern all-purpose flour
1/2 teaspoon baking powder
1/2 teaspoon fine sea salt
1 cup whole milk, at room temperature
5 large eggs, at room temperature
1 vanilla bean, split and scraped, or 1 tablespoon pure vanilla extract
1/2 cup solid vegetable shortening, preferably Crisco, at room temperature
3 cups sugar

Preheat the oven to 300 degrees. Generously grease a 16-cup (measure to the rim) Bundt pan with butter. In a bowl, sift together the flour, baking powder, and salt. Set aside. In a large liquid measuring cup, combine the milk, eggs, and the scraped vanilla seeds. Set aside.
In the bowl of a heavy-duty mixer fitted with the paddle, cream together the 1 cup of butter, vegetable shortening, and sugar on medium speed until light and fluffy. Add the flour and milk mixtures to the butter mixture in 3 batches, alternating between dry and liquid, occasionally scraping down the sides of the mixing bowl, beginning and ending with the flour mixture. Fill the prepared pan with batter (it should be no more than two-thirds full).
Bake for 15 minutes. Increase the oven temperature to 325oF and bake an additional 45 minutes, or until the cake is golden brown and pulls away from the sides of the pan. Remove to a rack and cool for 10 minutes. Invert the cake onto the rack and cool completely.
This cake will stay moist in an airtight container for up to 1 week.

Ten lords a-leaping - Nathalie’s Oyster Casserole
"This recipe, a marriage of a recipe I learned while an apprentice to Nathalie Dupree and Meme’s version of traditional oyster dressing, is an excellent side dish for a Thanksgiving feast. The myth about buying oysters only in the months with an R is not quite true, but not completely false either. However, it is best to buy oysters during the fall and winter when they are at their prime."

Place the oven rack 6 inches below the broiler and preheat the broiler. Brush a gratin dish with butter.
In a large skillet, heat the oil over medium-high heat. Add the green onions, bell pepper, and mushrooms and season with salt and pepper. Sauté until the vegetables are soft, about 5 minutes. Add the oysters and stir to combine. Decrease the heat to low and cook until the oysters are firm, an additional 5 minutes. Remove from the heat and keep warm.
In a medium saucepan, melt the 2 tablespoons butter over medium heat. Stir the flour and cook until foamy, about 2 minutes. Add the milk and bring to a boil over medium-high heat, stirring constantly until thickened, 3 to 5 minutes. Add the cheese and stir to combine.
Pour the cheese sauce over the oyster mixture and stir to combine. Add the parsley, paprika, and cayenne. Taste and adjust for seasoning with salt and pepper.
Pour the mixture into the prepared gratin dish and top with the breadcrumbs. Broil until browned and bubbling, about 10 minutes.

Twelve drummers drumming - Meme’s Yeast Rolls
"Meme may have made the rolls, but it was Dede who did a lot of the work. He beat the dough with a special wooden spoon that had a small ledge on the end for gripping. He’d cradle the big bowl in his arm and beat the wet dough so it slapped ‘wap, wap, wap’ against the bowl. All the ‘muscle’ developed the dough’s structure, causing the rolls to rise in the oven light as air, slightly sweet, and richly sour with the scent of yeast. We all thought it was Meme’s gently touch forming the rolls, but it was actually Dede’s strong arms that made them taste so good."
Visit www.virginiawillis.com for more information.
Recipes/excerpts from BON APPÉTIT, Y’ALL by Virginia Willis (Ten Speed Press, $32.50/HC, May 2008)
Posted by Peter Sherwood at 6:04 PM