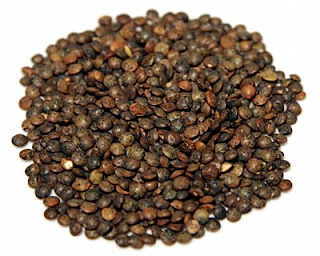 This is a delicious, hearty salad that would go well served alongside grilled brook trout--but we didn't even get that far, instead grazing over it for hours, eating right out of the pan and finishing up the next day. Don't use just water though to cook the lentils; try homemade mushroom stock (vegetable or chicken stock would do nicely too) and about half a cup of white wine. In our dish, the lentils were Goya, the beets were from a can, and the parsley was dried. Oh, and I fried three strips of bacon, removed them and sauteed the carrots and beets in the grease with a little butter instead of the suggested oil. Later, I crumbled the cooled bacon and tossed it into the mix at the end. C'est magnifique!

Lentilles du Puy with Roasted Carrots and Beets
Adapted from Saveur, Issue #18
Serves 6 as a side dish
"This recipe was developed for the esteemed lentils from Le Puy (which have been granted an appellation d'origine contrôlée by the French government), but any French-style lentil will do."
Ingredients
3 small beets, peeled and diced
1 large carrot, peeled and diced
4 shallots, peeled and halved
3/4 cup extra-virgin olive oil
2 sprigs fresh parsley
2 sprigs fresh thyme
Salt and freshly ground black pepper
3/4 lb. lentilles du Puy, or other French-style green lentils, picked over and rinsed
3 tbsp. sherry vinegar
1/4 cup chopped fresh parsley
1. Preheat oven to 400°. Place beets, carrots, shallots, and 1/2 cup oil in a medium roasting pan. Stir to coat vegetables evenly with oil. Add parsley and thyme, season with salt and pepper, and cook, stirring once, until vegetables begin to brown, about 20 minutes. Add lentils and 3 cups of water, stir, then cover pan with foil. Cook until lentils are tender and all water is absorbed, about 1 hour.
2. Remove pan from oven. Remove and discard herb sprigs, then dress lentils with vinegar and remaining oil. Allow to cool slightly, then stir in chopped parsley. Adjust seasoning and serve.
Variation—Different vegetables and dressings can be used for this salad. For instance, roast 2 cups peeled small pearl onions for 20 minutes as in step 1 above. Dice 4 celery stalks. Add celery and lentils to onions with 3 cups water, cover, and continue roasting. Meanwhile, mix 3 tbsp. fresh lemon juice with 1/4 cup extra-virgin olive oil in a small bowl. Stir in 1 minced peeled garlic clove and 2 tsp. finely chopped fresh thyme. When lentils are tender and liquid has been absorbed, toss with dressing. Adjust seasoning and serve. 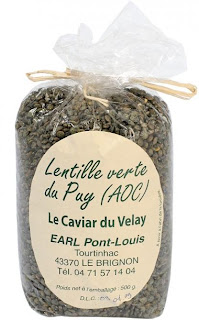 Posted by Peter Sherwood at 2:07 PM