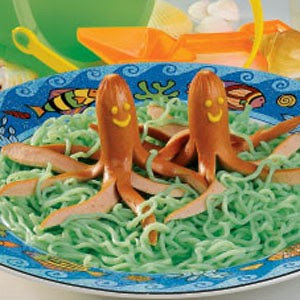 As the little ones around us grow up so fast, I think it's fair to say we all try to create memories as much for them as ourselves in an attempt to hold on to them as long as we can. For me, short of singing a torch song at karaoke or planning a Luau- or Western-themed surprise party, I try to inspire the children in my life with food. My niece still raves about my omelets with chives plucked from the garden. But one summer I made a special Hot Dog Octopus Lunch for my wee cousins who were only about 5 or 6 at the time. I don't remember where this recipe came from but it was hysterical and the kids loved it.

First get a bunch of hot dogs, some Ramen noodles, a squeeze-bottle of mustard and green or blue (or both) food coloring. Thinly slice the hot dogs from the mid-section down at least twice so when you boil them the ends will splay out like tentacles. Meanwhile, cook the noodles. After they're done, strain them, toss in a bowl with a few drops of the food coloring and then drop them on several plates to begin the creation of a wavy ocean scene for the youngins. Carefully place the cooked hot dogs on top, with their sea legs out and paint a smiley face on them with the squeeze-bottle of mustard.

Serve to what is hoped will be delighted yet calm little bodies.

P.S. Spaghettios heated up out of the can can also take the place of the Ramen and relish may act as a perhaps more theatrical green seaweed plot for a garnish in either case.
Posted by Peter Sherwood at 2:05 AM