Rabbit Is Rich (or not) 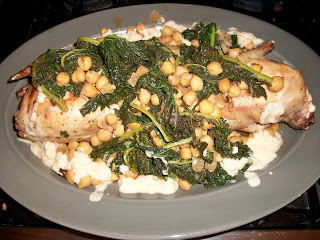 Despite my initial misgivings--I had wanted to use chicken--I forged ahead and cooked rabbit for the first time, procured from the nearby butcher. I felt guilty tossing the whole little body around in the roasting pan; it still resembled a rabbit frankly more than I would have wished, its hind quarters stretched out as if in mid-jump hopping through a field of clover. Usually I don't have much of a meat conscience but I admit I felt somewhat like the hunter returned home fresh from the kill, as it were.

Baby and I made a lighter version of the recipe from the cookbook that I had purchased at one of my most beloved, favorite places, Harvey Nichols in London--I've had this gorgeous tome for years and never have dallied with a single dish! It was time to dust it off! We didn't use whipping cream, only reduced-fat sour cream, soaked our own chickpeas over night instead of canned and then boiled them, swapped out spinach for the kale that we had on hand, substituted leaner Canadian bacon for the fattier pancetta it called for and used non-alcoholic beer instead of wine to save on more calories. We had a great dinner but we'd like to make it again and forego the meat altogether and just lightly toss the steamed greens and chickpeas in the luscious mustard sauce!

Comments on the recipe in italics--and I've taken care of the the conversions.

Rabbit, Spinach, Chickpea and Paprika-Cured Bacon with Mustard Sauce
Adapted from Harvey Nichols: The Fifth Floor Cookbook by Henry Harris with Hugo Arnold
Serves 4
Ingredients
big knob of butter (or a more reasonable knob)
2 saddles of rabbit, halved (or two whole chicken breasts or not)
4 rabbit legs (or not)
1/2 glass white wine (or fat-free chicken or vegetable broth, or non-alcoholic beer)
8 paprika-cured slices of bacon (or Canadian bacon)*
2 tablespoons olive oil
1 16 oz can of chickpeas, drained and rinsed
A big bunch of spinach or other greens, about 1 lb
1 garlic clove, finely chopped (we used a generous 1/2 teaspoon crushed garlic)

For the mustard sauce, gently saute the shallots in a small saucepan in the butter until translucent. Add the white wine and reduce by half. Add the whipping cream, bring to the boil, season and simmer gently for 1 minute. Whisk in the mustard.
Preheat the oven to 350 degrees. Melt the butter in a large roasting pan stovetop over medium heat. Season the rabbit pieces with sea salt and freshly ground black pepper and gently saute for 10 minutes, turning frequently until nicely browned. Add the white wine and transfer to the oven. Roast for at least 20 minutes until the pink bits have gone away, basting halfway through. Remove from the oven, transfer the rabbit to a plate and keep warm.
Place the roasting pan back on a medium heat and fry the bacon, Yorkshire-style (cooked but not crispy). Keep warm with the rabbit.
Add the olive oil to the pan and when hot, add the chickpeas and coat well in the oil. When they are sizzling, add the spinach and turn so it starts to wilt. Add salt and pepper to taste and the garlic and continue cooking for 2 minutes, turning frequently. Drain.
Meanwhile, quickly reheat the mustard sauce and whisk in the Dijon mustard.
Divide the spinach and chickpea mixture between 4 plates, arrange a rabbit leg and half a saddle on top of each pile, garnish with the bacon and spoon some mustard sauce around the edge of each plate.

*Paprika-Cured Bacon
Take 8 pancetta rashers and brush with olive oil that has been mixed with a generous pinch of paprika. This is best done a few hours before cooking.
Posted by Peter Sherwood at 5:57 PM