Leave It To Beets 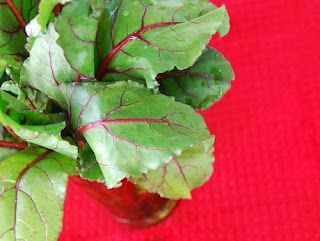 Freshly plucked from her garden, a friend gave Baby some gorgeous beets, which always remind me of the rich, red earth that Steinbeck wrote about. Baby was about to throw out the momentous leafy fronds when I suggested we prepare them on their own. Beet 'tails' are really composed of two different parts and the leaves should be separated from the stems by cutting a 'v' into them and then setting them aside while preparing the stems. Chop the stems into roughly half inch pieces and boil them in salted water with a few bay leaves until tender, about 10 minutes.

We experimented with the leaves by rolling them up and cutting along the bias to make a chiffonade. With a little toasted sesame oil and minced garlic, we simmered them down until wilted, added the softened, drained stems, tossed with a tablespoon or two of shoyu (naturally brewed soy sauce), a squirt of sriracha hot chili sauce and Sauce Istanbul, a wonderful dressing made simply with tahini, shoyu and water, found here.

What a treat--and what a shame if the leaves had been merely relegated to the garbage!
Posted by Peter Sherwood at 1:02 PM