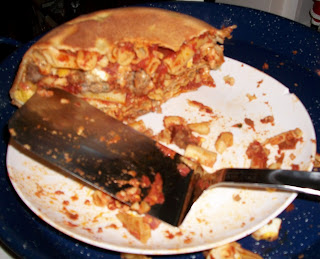 Baby and I were considerably moved after watching Big Night, where the owners of a failing Italian restaurant decide to go out with a bang by creating the most extraordinary meal that their personally invited guests have ever encountered. The molto moment is an incredible dish called timpano, where pasta and sauce, hard-boiled eggs, meatballs and cheese are baked into a huge pie, shaped like a drum (timpano--timpani, capiche?). Well, that was cause enough for us to get cooking and make a timpano of our own. Baby found a timpano pan (simply an enamel wash basin, really) on eBay weeks before our particular big night.

In preparation for our dinner on Thursday, we shopped on Monday for the meat and made the sauce as we began inviting a few people, which by happenstance created a rather international salon: Slovenia, London, Mexico, Philly, New York and New England were representing in the house.

The saucy ragu involved first searing pieces of stewing beef and spareribs, as depicted below. 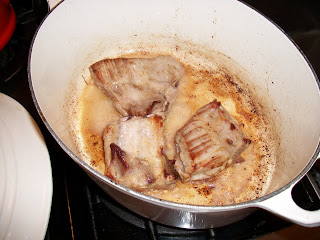 The meat was then added into the tomato sauce with a host of things such as onions, garlic, red wine, basil leaves and oregano which quietly sat in the refrigerator afterward for a few days once cooled. 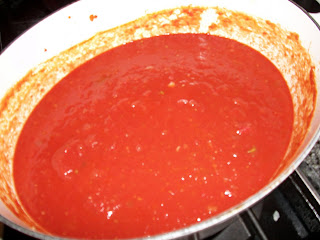 Thursday: I hated making the diminutive meatballs (polpette) and the process infuriated me. Apart from the fact that nobody has yet to invent a pan or a stove top large enough to harbor so many meatballs at once, the recipe says the little balls are done when they don't stick to the pan--but that wasn't the case here; they were done, still stuck, some fell apart and if I hadn't rescued them and delivered them to a safe plate they would have burned. My suggestion is to bake them on a rack in a good and hot oven to cook them evenly and cut out all that nonsense. The second batch worked out better and from the whole lot we picked out the best to stuff in our timpano.

Our gorgeous, patiently rolled out dough was strictly Baby's doing! 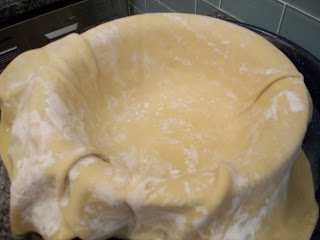 We filled the dough with layers of Genoa salami pieces, cubes of provolone cheese, sliced and quartered hard-boiled eggs, meatballs, ziti cooked al dente, and sauce powdered with lots of finely grated Pecorino Romano cheese and lastly topped with several beaten eggs before the dough was neatly folded over all of the sumptuousness and the ends trimmed. 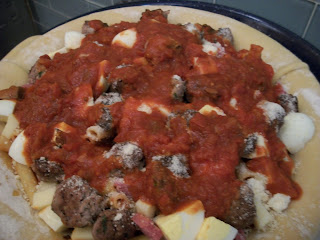 We set the table with melamine plates we recently found in Maine and Depression glass from Baby's parents! 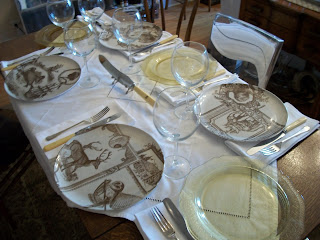 When the timpano emerged from the 350 degree oven, having reached an internal temperature of 120 degrees, it looked like this while we let it rest for 30 minutes, anxious as we were to dive in. 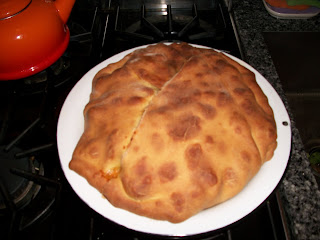 Making our timpano was pretty easy, but the real nail-biter was inverting onto a platter. Would it fall apart? Would we have to throw the whole mess in the garbage, tell our guests a rogue mongrel made off with our meal, while making our polite excuses, ordering in pizza or Chinese food? Well, you would have thought I had won the World Cup from the triumphant exclamations that came out of the kitchen when the timpano slid out of the enamel pan fully intact. I had such an exuberant feeling of accomplishment!

Here is our practically perfect timpano! 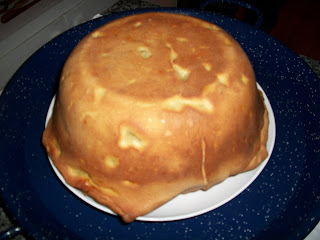 The stewing meat and spare ribs that we had simmered into our sauce were brought to room temperature, served on the side, and although that was eaten (along with a salad simply dressed with red wine vinegar, olive oil and salt a la minute), our merry band was too consumed with consuming our delicious drum, asking for seconds, thirds!