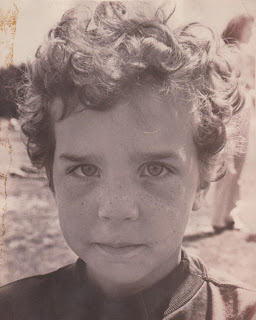 I don't mind telling you I ate dirt once. I was about five or so and I wanted to. I also used to wash my own mouth out with soap. In the event that I ever sassed my parents and was to be punished, I wanted to be prepared for the taste. Same went for when I would eat stale bread with a glass of water, in case I was ever thrown into jail. Also I had great plans for eventually opening a restaurant comprised only of marshmallows, served any way my clientele wished--basically lightly browned, a good fire on, or burned. Oh yes, left much to my own devices as a youth, I had a vivid interior life.

Some more stuff about my curious relationship with food: I never have really overeaten and have always remained relatively thin, but most times these days I don't eat enough, except in my gorging capacity as dining editor but even then I reign it in with portion control. In the last year I deliberately dropped 15 pounds, reaching a circumference that can once again fit into my pants.

I held a couple of waiter jobs when I was in college and was terrible at it. As it wasn't up to me to cook the food, I never cared if it ever made it to any of the customers' tables in a timely manner. I was too busy anyway scarfing down the lobster meat from the walk-in refrigerator at one place and devouring chocolate peanut butter pie off the dessert cart at another. I learned some things though during those particular posts. I would fiddle about with items I served such as boboli crusts, adding cheese, chopped tomatoes and bacon on them with a few spoonfuls of sour cream. I still love that. Once I called my friend when I bought a chicken and asked for any suggestions as to what to do with it. She suggested a sprinkling of lemon pepper in a 350 degree oven for 40 minutes or so depending on the size of the bird. Brilliant! But I never made a real meal until I was in my early 20's. It was an asparagus souffle from the pages of the Silver Palate cookbook. I would call it successful, but having tried my hand at souffles subsequently over the years, let's just call it beginner's luck.

Thankfully I finally figured out how to cook, instinctively divining what goes with what, all by myself, and have made a sort of peace with my odd, bordering-on-bulimic behavior toward food. My dinner guests are the better for it too and eagerly rush over, knowing I will earnestly try to serve them something else other than dirt for dinner.
Posted by Peter Sherwood at 1:36 PM