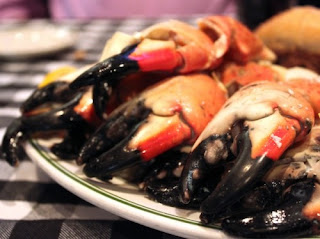 On an out of pocket afternoon in Miami, Baby surprised me with a trip to Joe's Stone Crab, now in its 98th season. We were just talking about it the previous evening with a few fellow barflies at The Raleigh and I confessed I had never been. In the early 1900's, it appears old Joe and his wife happened upon stone crabs, whipped up a now legendary mustard sauce, and voila, a sturdy tradition was born.

We sipped illicit martinis and sidecars sitting in the sprawling, sunny dining room that seemed blissfully unaware of time--a perfect classic steeped in history, like The Brown Derby in Los Angeles, with a fair share of revolving celebrity.

A round of oysters on the half shell was first up, then a lettuce wedge with tomatoes, cucumbers, and onions and Roquefort cheese. A passel of fresh, beauteous orange and yellow black-tipped stone crabs followed that I just adored, with the aforementioned mustard sauce. Baby ordered the jumbo lump crab cakes while I turned my thoughts to a steamed Maine lobster. The selections of seafood, meat and poultry range from $10.95 to $39.95 but somehow a most delicious 1/2 fried chicken comes out with a mind-boggling $5.95 price tag! Naturally, we had to try a slice of Joe's original homemade (and deliberately frozen) key lime pie, the recipe for which I've included below. I've also included the recipe for the mustard vinaigrette with a link to the mustard sauce. Thanks to Saveur magazine for that!

As the sign says, "EAT AT JOE'S" or have dinners shipped to your home by calling 800-780-CRAB and alternatively visiting joesstonecrab.com.

For the graham cracker crust:
Preheat the oven to 350 degrees F. Butter a 9-inch pie pan. Break up the graham crackers; place in a food processor and process to crumbs. (If you don't have a food processor, place the crackers in a large plastic bag; seal and then crush the crackers with a rolling pin.) Add the melted butter and sugar and pulse or stir until combined. Press the mixture into the bottom and sides of the pie pan, forming a neat border around the edge. Bake the crust until set and golden, 8 minutes. Set aside on a wire rack; leave the oven on.

For the filing:
Meanwhile, in an electric mixer with the wire whisk attachment, beat the egg yolks and lime zest at high speed until very fluffy, about 5 minutes. Gradually add the condensed milk and continue to beat until thick, 3 or 4 minutes longer. Lower the mixer speed and slowly add the lime juice, mixing just until combined, no longer. Pour the mixture into the crust. Bake for 10 minutes or until the filling has just set. Cool on a wire rack, then refrigerate. Freeze for 15 to 20 minutes before serving.

Posted by Peter Sherwood at 9:27 AM