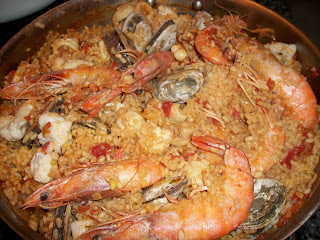 With George's shrieking mother from Seinfeld firmly in mind, I recently attempted Paella a la Marinera, which seemed to me to be the most traditional version of the Spanish fish dish served with rice. There are a thousand different varieties I'm sure. This all started because my dear friend sent me a packet with two grams of Iranian Sargol saffron threads, so what else to do? Make paella and use the largest pan you have to accompany the abundance of fish!

This paella was a good first try. The rice was perfectly cooked and the fish was not overcooked: that is indeed the goal, since both are on such intimate terms with one another.

We used red snapper fish heads and bones for our stock as that was what was available from our fishmonger; here we simmered them down with cubes of court bouillon and vegetable bouillon (or just chopped carrots, onions and celery) in the mix. Add enough water to cover. A few cloves impart a most elusive flavor. Strain it of course when you're through. Regrets to my fine fishy friends gazing heavenward from the pot. 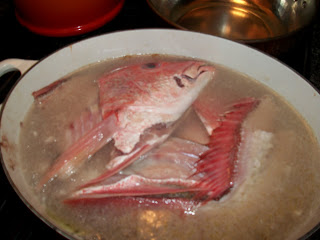 Keep this stock excited for about 45 minutes and once it has cooled, place it in the fridge to reveal a most gelatinous consistency the next morning. Skim the fat before incorporating the stock into your paella.

While steeping the saffron which adds color as well as flavor, we sauteed the monkfish, head-on shrimp and squid in a generous amount of olive oil with sea salt and pepper. 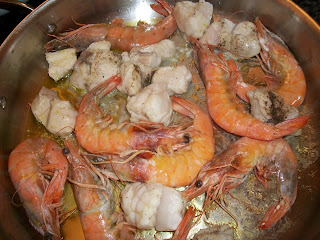 The paprika, onions, diced tomatoes (canned), garlic, chopped peppers (jarred) all went into the pan once the large shrimp and monkfish were removed and set aside (these go back in later). Subsequently, the fervor was further brought to a boil with the fish broth added in. 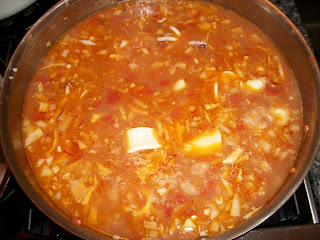 Trust the rice. Once the grain is ingrained into the paella, don't fret over it, but do check in to see what's cooking. Do enjoy!

1. Put saffron and 1⁄4 cup hot water in a small bowl; let sit for 15 minutes. Season monkfish with salt and pepper. Heat oil in a 16"–18" paella pan over medium-high heat. Add monkfish and langoustines and cook, turning occasionally, until golden brown, about 5 minutes; transfer monkfish and langoustines to a plate and set aside. Add cuttlefish, paprika, tomatoes, garlic, peppers, and onions to pan and cook, stirring often, until onions are soft, about 6 minutes. Add reserved saffron mixture and broth, season with salt, and bring to a boil over high heat.

2. Sprinkle in rice, distribute evenly with a spoon, and cook, without stirring, until rice has absorbed most of the liquid, 10–12 minutes. (If your pan is larger than the burner, rotate it every two minutes so different parts are over the heat and the rice cooks evenly.) Reduce heat to low, add reserved fish and langoustines, and nestle in clams hinge side down; cook, without stirring, until clams have opened and rice has absorbed the liquid and is al dente, 5–10 minutes. Remove pan from heat, cover with aluminum foil, and let sit for 5 minutes before serving.